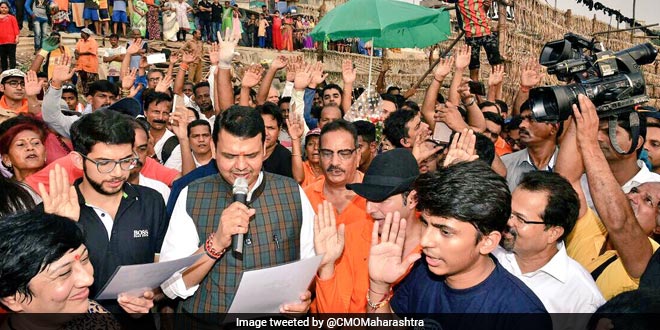 New Delhi: After halting the Versova Beach cleanup after 109 weeks, Afroz Shah resumed the drive finally on Saturday. A day after, on Sunday, Chief Minister Devendra Fadnavis and Yuva Sena president Aditya Thackeray joined the proceedings along with lawyer Afroz Shah who spearheaded the movement, which is now in its 111th week. Chief Minister Devendra Fadnavis lauded Afroz and his entire team for their contribution towards the Swachh Bharat Abhiyan and said that the state government fully supports his initiative and would soon prepare a policy for marine and coastal cleanliness and conservation.

Afroz Shah has been working on a policy for marine and coastal cleanliness and conservation. He will submit a draft policy to the state government soon and then after reviewing it the government will finalise the beach cleaning policy, added Chief Minister Devendra Fadnavis.

The Chief Minister also interacted with hundreds of school children who participated in the drive at Versova on Sunday.

Aaditya Thackeray who was also present at the cleanup said,

Visited @AfrozShah1 & his team today. We both kept our promises. Mine to support him wholeheartedly. His promise to me: to not give up.

Visited @AfrozShah1 & his team today. We both kept our promises. Mine to support him wholeheartedly. His promise to me: to not give up. Interacted with locals, school kids and promised to come back again. Hon’ble @CMOMaharashtra & the Mayor @iamvmahadeshwar ji were present too. pic.twitter.com/zSY2vubawz

Overjoyed with the support from the politicians and people, Afroz Shah added,

It is a sheer joy to see the enthusiasm of students, elected representatives, Citizens, Kids to bond and connect with nature / ocean.

I am happy to resume the cleanup, I will continue to work towards changing the mindset of people towards littering. And, this is my way of making a change. Because, once we bond with nature and have sense of belonging, mindset changes will take place.

Since October 2015, Afroz and his volunteers have cleared approximately 9 million kilograms of trash from the Versova beach and for this he has also been awarded the UN’s top environmental accolade — Champions of the Earth award.

Can Electric Cars Replace Fossil Fuel Cars And Be The Future Of India?