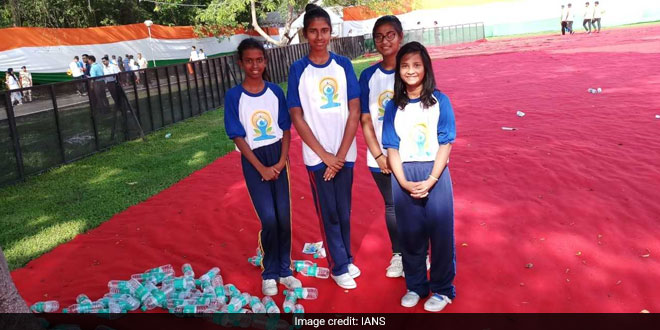 New Delhi: They may not be yoga experts but a group of children who attended the International Yoga Day at Dehradun on Thursday, on their own, cleaned up the sprawling ground where the event took place after it resembled a dustbin, with water bottles strewn everywhere.

When people rushed home leaving behind used water bottles, the four children decided to spruce up the Forest Research Institute (FRI) ground. They were not bothered if anyone, including Prime Minister Narendra Modi or Uttarakhand Chief Minister Trivendra Singh Rawat, had taken notice of their self-assigned task.

Uncle, it was looking dirty. I thought it will be best to clean up this field until my mother comes and takes me home, said Yashvi Gupta, a Class 5 student of Dehradun’s Times World School when asked why was she doing it.

Sweating profusely due to the searing heat, Shubhika Jain, a Class 7 student, added: “No matter if the ground is not my home, it’s Dehradun’s beautiful location which should not be dirty.”

Similar views were echoed by Bhavya Jain, a Class 9 student who helped to heap the empty plastic bottles under a tree.

“This city is my birthplace. It’s not less than my home. There should be no shame in cleaning. This feeling should also come in the minds of those who dirty a place,” she added.

Akanksha Gupta, a Class 12 student and the oldest among the child enthusiasts, underlined how the public space in foreign countries was always kept clean.

“People in foreign countries never dump unused things anywhere outside. If we want to clean India, we should contribute, at least our time.”

They were among the children who turned up at the Forest Research Institute ground early in the morning to be part of the fourth International Yoga Day event that was attended by nearly 50,000 people as well as the Prime Minister.

Everyone performed 21 yoga postures or ‘asanas’ during the 45-minute event. There were other children too who plunged into the act of cleaning up the mess left behind by the adults. Yoga Day, they said, would be incomplete otherwise.

Most People Aware Of Harmful Effects Of Plastics But Still Use It: Study