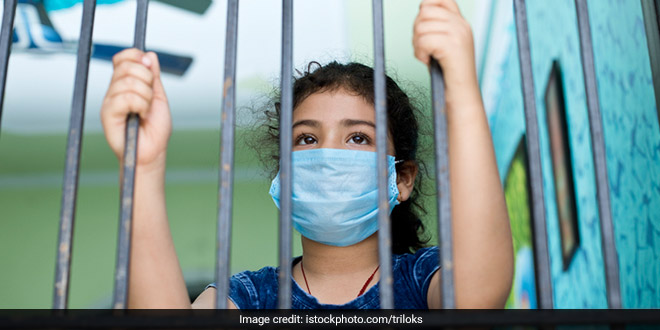 New Delhi: The disruptive effects of the COVID-19 pandemic have intensified the burden of malnutrition among children in the country, especially from the vulnerable and economically poor families, finds India Child Well-being Report 2020, released on Tuesday (November 24) by World Vision India, a non-governmental organisation that works towards helping the underprivileged children. According to the report, COVID-19 pandemic and the subsequent lockdown has put almost 115 million children at the risk of malnutrition.

Also Read: India Is Home To The World’s Most Wasted Children, As Per The Global Hunger Index 2020

The report highlights that due to the pandemic, decline in household incomes, changes in the availability and affordability of nutritious foods and interruptions to health, nutrition and social protection services increased. Because of this, many children in the country are no longer having three meals a day and many are missing school mid-day meal. The report further says that an increase in malnutrition can decrease the economic growth of a nation by approximately 8 per cent due to loss in productivity caused by reduced schooling and cognitive impairments. While talking about the report, Madhav Bellamkonda, National Director and CEO, World Vision India said,

The delivery of health and nutrition services have been impacted badly since the pandemic hit the nation. The report is clearly calling for more investments in the early childhood development and child protection.

The report which captures data on health, bodily integrity, protection and emotional well-being of children from 640 districts across 28 states and 9 Union Territories highlighted that the districts of Kerala, Tamil Nadu, Punjab, Himachal Pradesh and Jammu and Kashmir are among the better performing states in terms of child well-being. The districts of Odisha, Uttar Pradesh and Madhya Pradesh, on the other hand, scored low.

Districts of Odisha, Jharkhand and Bihar, according to the report, are performing poorly on indicators such as sex ratio, which is the ratio of males to females in a population, among children less than six years of age, birth weight, infant mortality and under-five mortality rate.

It is a very important report because we need data to speak to the people. The report clearly shows that when it comes to child well-being in India, the time to act has come and we cannot ignore this anymore. COVID-19 is affecting the vulnerable children to an imaginable level. The data we have right now from the ground is still very limited. Over 1.5 million schools have been closed for over 10 months now. But when these schools will open, many of the children may not even go back to school because poverty is increasing due to the pandemic. The children are unable to get the take-home ration from many schools and Anganwadi centres. To improve the well-being of children in the country, the water and sanitation services also need to reach every child.

Basanta Kumar Kar, Recipient of the Global Nutrition Leadership Award, said that while children are not the face of the pandemic, they are certainly the victims of it. He added that while the report gives us a look at important aspects of children’s well-being in the country, it would have been even more fruitful to have included the national or state governments in this effort for greater ownership and legitimacy. He said,

Apart from highlighting the ground reality, which is extremely important, there is a need to sensitise the policymakers for desired actions.

Explainer: Will COVID-19 Vaccines Protect Us? Does Efficacy Equal Effectiveness?