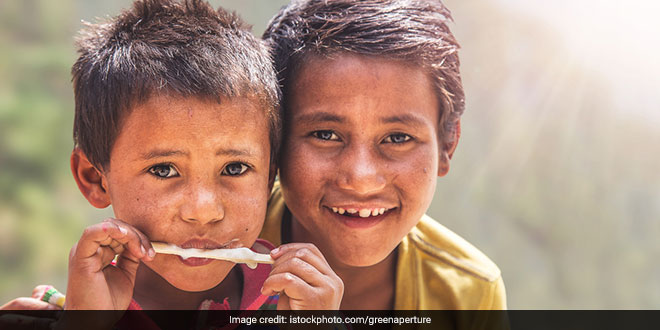 New Delhi: India has ranked 94th out of the 107 assessed countries on the 2020 Global Hunger Index (GHI), with a level of hunger that is categorised as ‘serious’* with an overall score of 27.2*. The Global Hunger Index comprehensively tracks and measures hunger across the world and the report was released to mark the World Food Day. It further says that the prevalence of wasting among children under 5 in India is ‘very high’. GHI states that India, with 17.3 per cent, has the most wasted (low weight for their height) children out of the nations assessed.

The report states that in 11 countries, the public health significance of child wasting rates is considered “high” (10–<15 percent) or “very high” (≥15 percent):

India is also home 14 per cent undernourished children under the age of 5 and 34.7 per cent stunted children in the same age. The Under 5 mortality rate of India stands at 3.7 per cent, as per GHI.

Furthermore, these projections do not account for the impacts of the COVID-19 pandemic, which may worsen hunger and undernutrition in the near term and affect countries’ trajectories into the future, the GHI highlights.

India’s neighbouring countries, Pakistan, Nepal and Bangladesh have secured a better rank than India. While Nepal’s is ranked 73, Bangladesh and Pakistan are ranked 75 and 88 respectively.

This is testimony to the consolidated efforts of the government to strengthen the delivery of programmes and services around nutrition and health to children and women in India; particularly since the launch of POSHAN Abhiyaan two and a half years ago. UNICEF recognises that about 50 per cent of children still have some form of undernutrition- these are mainly cases of  wasting or stunting. We also have particular concerns about the potential impact that COVID might have had in reversing the very positive trends that we have been witnessing over  the last years.

GHI scores are comparable only within each year’s report, not between different years’ reports, the report states. Antaryami Dash, Nutrition Head with the non-profit Save The Children, explained why we can not compare the GHI 2019 ranking, where India was at 102nd position to the ranking of 2020.

This is mainly because of the following three reasons; firstly the denominator is not same for every year. Year on year the number of countries assessed have been varying and we need to see which countries have been dropped out and for what reasons. Secondly, there has been a major methodological shift in the calculation of the GHI score after 2014. Lastly, the current and historical data on which the GHI scores are based are continually being revised and improved by the United Nations agencies that compile them, and each year’s GHI report reflects these changes. Comparing scores between reports may create the impression that hunger has changed positively or negatively in a specific country from year to year, whereas in some cases the change may be partly or fully a reflection of a data revision.

However, Mr Dash says that the Global Hunger Index is helpful as a tool for prioritising our national programs. Although, it is not diagnostic of the real issue of hunger. We need to construe the index more carefully and further unpack the interplay between stunting, wasting and mortality.

Also Read: “Malnutrition Is A Combination Of Lack Of Nutritious Food, Water And Sanitation And An Inadequate Healthcare System,” GAIN’s Lawrence Haddad

Dr Shweta Khandelwal, Head, Nutrition Research at the Public Health Foundation of India, tells NDTV that Public health and nutrition (PHN) in India urgently needs to be prioritised, not only in form of programme announcements but real action on the ground and renewed commitments to making India malnutrition free by 2022. She said,

India has one of the most impressive portfolio of programmes and policies around PHN on paper but the indices on multiple forms of malnutrition are still abysmal. We must note that while undernutrition including wasting, stunting are very gradually declining, overweight-obesity among all sections of society are rising. It is not only about quantity of food, the quality matters even more. Hunger can be satisfied by providing calories, especially from carbohydrate rich staples and that’s what has been the focus of most governments but we must now realise that this approach is short sighted.

In light of all ensuing evidence, we must focus on providing sustainable healthy composite meals which are balanced in macro- and micro-nutrients and reducing food wastage, Dr Khandelwal states.

A holistic vision and an effective concrete action plan to curb hunger will include a focus not only on nutrition specific interventions like providing food or supplements but also on nutrition-sensitive actions like WASH, agriculture, women’s empowerment, education, environment etc in an enabling environment steered by right policies and robust committed leadership, she added.

Basanta Kumar Kar, ‘Nutrition Man’ and recipient of the Global Nutrition Leadership Award says that India has gold mines of food and nutrition models, glorious history of diversified and rich tradition of food delicacies. We need to build on our models and food culture, promote, preserve and take a self-pride in that, he said.

India has a history of great social movements like Green and White Revolution which made India self-sufficient in staple crops and milk. India needs to learn and build on these models instead of depending upon culturally and contextually alien models. India’s thinking, action and narrative needs a reorientation.

Our food and nutrition system has to address India’s double burden on malnutrition which indicates a diluted food system. A leadership agenda of action on nutritional self-reliance is the need of the hour during and post pandemic situation. Science and  technology  centered evidence-based programming that includes traditional food and medicine can enhance self-pride and nutrition outcomes. Building capacities of grassroot functionaries and local government on new generation nutrition knowledge,  convergence and just and equitable governance can break passivity in the nutrition sector.

Antaryami Dash of Save The Children also highlighted the impact of COVID-19 on the crisis of hunger and undernutrition.

This year’s report does not yet reflect the impact of COVID-19 on hunger and undernutrition. It is clear that the measures taken throughout the world to contain the spread of COVID-19 have already increased food insecurity. It’s estimated that for each percentage point drop in global GDP, 700,000 additional children are expected to suffer from stunting, a symptom of chronic undernutrition.

Worldwide hunger is at a moderate level, according to the 2020 Global Hunger Index. However, the report says that far too many individuals are suffering from hunger and undernutrition. GHI also raises concerns over the Sustainable Development Goal of Zero Hunger by 2030.

The world is not on track to achieve the second Sustainable Development Goal – known as Zero Hunger for short – by 2030. At the current pace, approximately 37 countries will fail even to reach low hunger, as defined by the GHI Severity Scale, by 2030, the report states.

Africa South of the Sahara and South Asia have the highest hunger and undernutrition levels among world regions, with 2020 GHI scores of 27.8 and 26.0, respectively, both fall under the serious category.

Additional countries for which data were insufficient to calculate 2030 projections may also fall short of this goal. Within their borders, countries show wide disparities in a range of different indicators of hunger and along several lines such as wealth, location, ethnicity, and sex, according to GHI.

The Global Hunger Index is a tool designed to comprehensively measure and track hunger at global, regional, and national levels. GHI scores are calculated each year to assess progress and setbacks in combating hunger.

The GHI goes beyond treating hunger in terms of calorie intake, it looks at four factors:

The GHI aims to raise awareness and understanding of the struggle against hunger, provide a way to compare levels of hunger between countries and regions, and call attention to those areas of the world where hunger levels are highest and where the need for additional efforts to eliminate hunger is greatest.

In 2020, Lives and Livelihoods Of Up To 270 Million People Will Be Under Severe Threat: WFP’s Cost Of A Plate Of Food 2020 Report