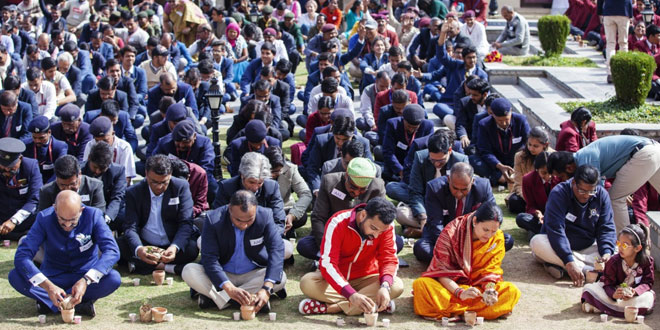 New Delhi: The people of Udaipur came together to celebrate the birthday of the prince of Udaipur Maharaj Kumar Lakshyaraj Singh Mewar in a unique way by making a world record, on Tuesday. On his birthday, the prince initiated a ‘Vriksh Hi Jeevan Abhiyaan’ (‘trees are life’ Mission) in which more than 4,000 (4,035) people participated and potted saplings in less than 60 seconds. This initiative broke the previous record which stood at 2000 saplings potted in 60 seconds. While talking to NDTV about the initiative, Prince Lakshyaraj said,

The idea behind this initiative was to encourage people to work for a cleaner and greener tomorrow, given the current challenges of global warming, ecological imbalance and various natural calamities which have resulted due to our activities. Our focus should be to give back to the nature. From birth till the end we take so much from the environment and the society. Thus caring for the mother earth should be a priority for each one of us so that we are able to provide a better tomorrow for the generations to come.

On 28th January 2020, 4,035 saplings were planted at City Palace Udaipur.
.
A Guinness Book World Record for Most People Potting Plants Simultaneously was made.
.
‘वृक्ष ही जीवन’ अभियान – a constant endeavour for a greener tomorrow. pic.twitter.com/qfDLa482Jm

According to the prince, thousands of school students, army personnel and citizens from all walks of life participated in the event. He further said that the each participant was asked to take the plant potted by them to their home and take care of it and make it a part of their lives.

Today I am celebrating my birthday planting saplings as a part of my latest initiative ‘Vriksh hi Jeevan’ and in the process we attained a third Guinness record. This one was for the most people potting plants simultaneously.

Thank you to everyone who made it possible. pic.twitter.com/vnjkS8Q0yb

“We all have to step in and take the charge of bringing a change, before it gets too late”, says Prince Lakshyaraj on the current state of air pollution. He added that the recent fires in the Amazon forest and the bushfires of Australia have instilled a new sense of empathy in him which led him to start the Vriksh Hi Jeevan Abhiyaan’. He further said that,

Taking care of the Mother Nature will not only help environment, but also the people as it will improve their standard of living and the quality of their life.

Yogesh Sharma, who runs a resort near Fatehsagar Lake of Udaipur, participated in the initiative said,

It is a matter of pride for all of us as we are a part of the prestigious world record. But more than that, the event got us all discussing about the current situation of deteriorating air quality in so many cities of our country. While Udaipur’s air quality is not that bad but looking at the rate of development and urbanisation, it is just a matter of time.

In the end, Prince Lakshyaraj shared that the Palace intends to continue and further intensify its green initiative by planting trees on hills of Aravalli that has been facing deforestation due to various developmental activities and making people aware about the importance of living an eco-friendly life.