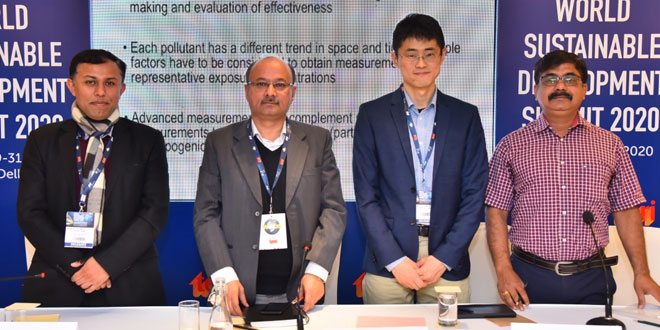 New Delhi: The grave problem of air pollution and its health hazards are now well established. To battle against one of the biggest global environmental challenges, air pollution, across the country, National Clean Air Programme (NCAP) was launched by the Ministry of Environment, Forest and Climate Change (MoEFCC) on January 10, 2019. Now, to further strengthen India’s determination to curtail air pollution and support NCAP which aims to reduce the PM 2.5 and PM 10 concentrations by 20-30 per cent by 2024, a Clean Air Project (CAP) has been launched in four Indian cities.

On Wednesday (January 29), at the World Sustainable Development Summit 2020, The Energy and Resources Institute (TERI) along with Swiss Agency for Development and Cooperation (SDC) announced CAP India to improve air quality. The project has been initiated in Uttar Pradesh’s Lucknow and Kanpur and Maharashtra’s Pune and Nashik and will be implemented in partnership with the city authorities.

Talking about how the four cities were identified for the implementation of CAP, Dr Sumit Sharma, Director, Earth Science and Climate Change Division, TERI, told NDTV,

In order to select the cities, the SDC carried out a scoping study with the International Institute for Energy Conservation (IIEC). A multi-criteria analysis (MCA) was performed to identify two to three Indian states based on the on-going initiatives on tackling air pollution and their continuing challenges. MCA was performed on the basis of severity and sources of air pollution, population density and associated health impacts, economic standing of the state, readiness or preparedness of state in terms of policies/regulations or acts, institutional capacity, etc. On the basis of MCA, the scoping study identified the states of Uttar Pradesh and Maharashtra and later the cities.

By the end of the project in September 2023, the CAP India programme aims to have three major outcomes – improved data measurement and analysis on clean air; enhanced capacities of city and state authorities to implement clean air policies and action plans; increased public awareness for clean air action.

To start with, secondary and primary data collection will be done to formulate emission inventories. Advanced monitoring equipment will be placed for the generation of real-time source apportionment results. State of the art air quality simulation models will be used to ascertain source contributions and also to identify key strategies for control. In consultation with the local agencies, key strategies will be identified for pilot demonstration of technologies for control of emissions. Parallely, the team will also work on capacity building and creating awareness in schools, colleges, media, and industries, said Dr Sharma.

Along with introducing new methodologies and monitoring equipment, the team will work towards strengthening existing action plans based on scientific studies. The team also plans to suggest revision in protocols for source apportionment, data collection and design of monitoring networks.

For the execution of CAP India, a consortium of national and international organisations including Automotive Research Association of India (ARAI), and International Institute for Applied Systems Analysis (IIASA) has been formulated. On the other hand, for carrying out the research for the project, a team of Paul Scherrer Institute (PSI), IIT Kanpur, IITM (Pune), and National Environmental Engineering Research Institute (NEERI) has been constituted.

The reason behind involving international organisations like PSI, IIASA and EPFL is that they will bring international experience and state-of-the-art methodologies for assessment and implementation of strategies to control air pollution.

Explaining how the CAP will support NCAP and cities in achieving their respective action plans to meet the target of NCAP, Dr Sharma said,

The CAP India project will help the cities to meet the targets of NCAP by strengthening their existing air quality management plans based on the advanced source apportionment studies, by prioritising the immediate measures and by developing a framework for ensuring the timely implementation of the plan.

Also Read: Six Of The Country’s Most Polluted Cities Are In Uttar Pradesh While Top Two In Jharkhand, Reveals Greenpeace Study

NCAP has already completed one year and so far, the number of non-attainment cities has increased from 102 to 122, cities have submitted their action plans and funds have been released to some cities. Speaking at the event, Arvind K. Nautiyal, Joint Secretary, Ministry of Environment, Forest and Climate Change, spoke about the progress made under NCAP and said,

Also Read: Air Pollution: What Does The Artificial Lungs Put Up To Check Air Quality In Mumbai Reveal?