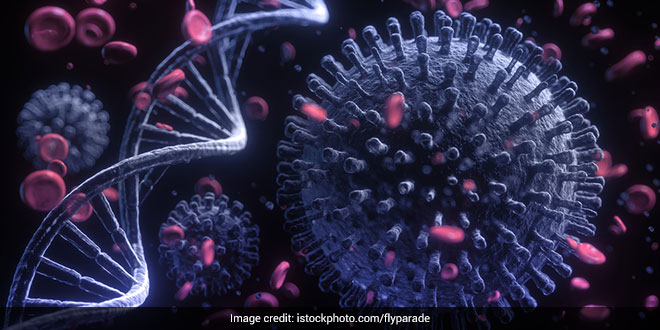 New Delhi: In a step towards prospective surveillance in view of the new COVID-19 virus strain detected in the United Kingdom, the Central government’s national task force (NTF) on Saturday (December 26) said that five per cent of the positive cases from all states and union territories will be tested for Whole Genome Sequencing (WGS). National Task Force held a meeting here to discuss testing, treatment and surveillance strategies for COVID-19 in view of the new virus strain from the UK and said there is no need to change the existing treatment protocol due to mutation.

A Health Ministry release said a genomic surveillance consortium, INSACOG, has been formed under the leadership of NCDC.

It said more than 50 samples of UK returnees are currently under sequencing at the designated laboratories.

Five per cent of the positive cases from all states/UTs will be tested for WGS. A genomic surveillance consortium, INSACOG, has been formed under the leadership of NCDC, New Delhi for laboratory and epidemiological surveillance of circulating strains of SARS-CoV-2 in the country, the release said.

NTF said that since ICMR has always recommended the use of two or more gene assays for testing SARS-CoV-2, it is unlikely to miss infected cases using the current testing strategy.

According to the Union Health Ministry, the variant strain has 14 non-synonymous (amino acid altering) mutations, 6 synonymous (non amino-acid altering), and three deletions. Eight mutations are present in the Spike (S) gene which carries the binding site (Receptor Binding Domain) of the ACE2 receptors, which are the point of entry of the virus into the human respiratory cells.

NTF deliberated in detail on aspects related to current national treatment protocol, testing strategy and surveillance of SARS-CoV-2 vis-a-vis the UK variant strain. Since the UK variant strain is implicated to cause increased transmissibility of the virus, it is critical to identify individuals infected with this strain and adequately contain them to prevent its transmission in India, the Health Ministry said in a release.

“NTF concluded that there is no need to change the existing treatment protocol in view of mutations emerging in the strain,” it said.

The release said NTF recommended that in addition to the existing surveillance strategies, it is critical to conduct enhanced genomic surveillance for SARS-CoV-2 specially in incoming passengers from UK.

Besides, it will also be critical to conduct genome sequencing in samples where there is dropout of the S gene in lab diagnosis, proven cases of re-infections etc. Routine genomic surveillance of SARS-CoV-2 from representative samples all across the samples needs to be a continuous and well planned activity, the release said.

NCDC officials told the meeting that the government has taken cognizance of the reports of mutant variant of SARS-CoV-2 reported from UK and the response of other countries to these reports.

The release said a strategy has been put under place to detect and contain the mutant variant.

At points of entry of all International airports in India, all passengers who had arrived from UK between December 21 and December 23 have been tested. Only after the RT-PCR test result are available, the negative passengers are permitted to exit the airports, the release said.

It said all positively tested passengers are put under institutional isolation and their samples sent for Whole Genome Sequencing (WGS).

In terms of community surveillance, the government has shared the list of all UK arrivals during the last 28 days by Bureau of Immigration with the concerned states.

It said positive cases are to be discharged only after ensuring two samples testing negative after 14 days.

The release said enhanced genomic surveillance for early detection and containment of the UK variant SARS-CoV-2 strains will continue.

However, it is important to understand that like all other RNA viruses, SARS-CoV-2 will continue to mutate. The mutated virus can also be contained by measures like social distancing, hand hygiene, wearing masks and also by an effective vaccine, as and when available, the release said.