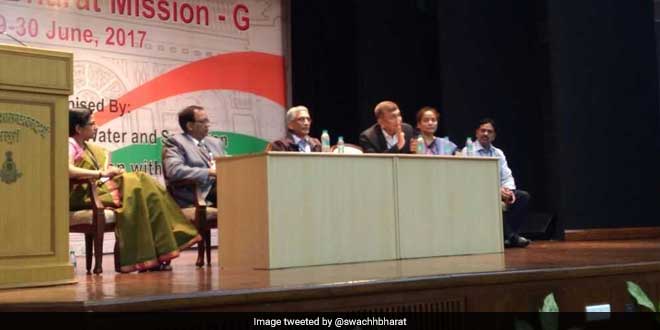 As the Swachh Bharat Abhiyan takes strides towards eradicating open defecation and bringing in behavioural change among people with regard to sanitation, the Abhiyan is looking at cooperation from all levels of administration, and people in general. These are the principal talking points at the ongoing Collectors’ Conference on Swachh Bharat, from June 29 to 30 at Mussoorie. The two-day conference will discuss methods of open defecation free (ODF) verification, sustainability guidelines, major sustainability models and best practices being used across the country for Swachh Bharat Abhiyan.

Speaking about the importance of Swachh Bharat Abhiyan, Mr. Iyer also stressed on how equally important was it to focus on behavioural changes and ensure that people used the built toilets. Focusing on merely construction of toilets will do no good as long as they are not used regularly. This is the reason why the Swachh Bharat Mission stressed on the importance of ODF verification to ensure that a particular village, town or city is declared ODF only after thorough verification and ensuring that not one person practices open defecation in the verified area.

At the conference, Mr. Iyer also stressed on the important role played by a Swachhagrahi in ensuring that motivation plays a key role in planning a district’s ODF strategy. Swachhagrahis are young people identified to motivate others to adapt effective methods of sanitation and cleanliness. It was also announced in the conference that under the Zila Swachh Bharat Prerak (ZSBP) initiative launched by Tata Trusts, 600 professionals have been trained to support 600 districts in their initiative towards becoming ODF. The Preraks will be instrumental in implementing ODF plans in the districts, lead behavioural change programmes and monitor initiatives taken under Swachh Bharat Abhiyan and regularly report on the same.

Young officers share experiences of behaviour change during their field visits to encourage communities to build and use toilets pic.twitter.com/dOSdPM4P9J

On the conference’s inaugural day, also present were Shishir Sinha, Development Commissioner of Bihar, Arun Baroka, Joint Secretary, Swachh Bharat Mission, V. Radha, Joint Secretary, Ministry of Drinking Water and Sanitation and J.P. Shukla, Master Trainer. Assuring Bihar’s participation in the Swachh Bharat Abhiyan, Mr Sinha stated that cleanliness is one of the state’s top priorities and the momentum of the movement will gather acceleration in Bihar in coming days. Ms Radha spoke on how Swachh Bharat was not restricted to just eradication of open defection but also equally focused on solid liquid waste management. She said that towns, villages and cities should aim to go ODF plus and not just ODF, with adequate focus on solid and liquid waste management.

Officials from @QualityCouncil inspected several areas at Medininagar as part of the Field verification for #ODF declaration. #MyCleanIndia pic.twitter.com/bLE9l0JYGh

Trainee collectors were also briefed on the ODF verification guidelines which are to be followed when a particular area is about to be declared ODF, by Mr Arun Baroka. Similar to a recent field verification for ODF declaration by Quality Council of India officials in Medininagar, Jharkhand, the trainee collectors were told about the processes involving ODF verification. The trainee officers were also asked to share their experiences of field visits and how they encouraged communities in rural areas to build toilets. The conference reaffirms the stance of the Swachh Bharat Abhiyan of involving district level officials in sanitation activities and providing them with adequate training to not only verify a place for ODF, but to motivate and participate in activities undertaken by district communities to achieve better sanitation and cleanliness.

No Work No Wage, Says Delhi High Court In Reference To Delhi Municipality Safai Karamcharis Not Showing Up For Work