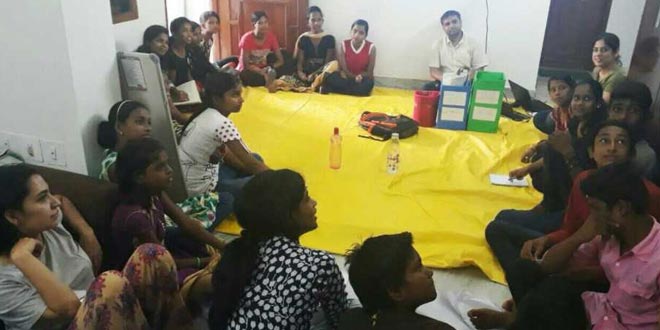 Bhubaneswar, a small city spread over 422 square kilometres and with a population of just over 8,00,000 has been on the list of potential smart cities, under the Ministry of Urban Development’s Smart Cities Mission. Despite its small stature, the city is yet to adopt sanitation and waste management techniques fully and effectively.

Bhubaneswar produces an estimated 500 metric tonnes of municipal solid waste daily and much of the city’s waste goes to the landfill at Bhuasuni. The Bhubaneswar Municipal Corporation is trying to set up a waste treatment plant at the landfill site, but disagreement with the locals has delayed the project’s outcomes.

The waste management scenario in Bhubaneswar is still at a nascent stage as the concept of waste segregation is yet to catch up fully. The idea behind conducting the workshop was to spread more awareness about waste, its nature and how it can be tackled, said Narsingh Panigrahi, waste management expert and founder of Shree Ganesh Recycling, a waste recycling entrepreneurship.

This is the reason why children were chosen as the attendees of the workshop is apart from the benefit of catching them to inculcate waste management practices, they can be used to urge their parents to do the same back home.

Bhubaneswar has around 100 child leaders from lower economic backgrounds who are active in community development in slum areas. Child leaders from 20 different slum areas of the city were brought to attend the workshop. Since each child participating in the workshop was a designated child leader, they were also told about the role they could individually play to ensure a greener environment by responsibly managing waste. The children were also given examples of best practices and easy solutions and were asked to give ideas on what they thought could be good waste management solutions.

Waste has always been viewed as something unnecessary by the society and hence often disposed of casually. That is the reason why waste has become such a big problem today. We must understand that casual disposal of waste is not the way it should be treated. The workshop focussed primarily on this, said Mr Panigrahi.

The workshop ended with children promising to start segregation of waste and adhere by the practice of three R’s of Reduce, Reuse and Recycle. The children were also shown animated videos on Do-It-Yourself (DIY) sessions on how presently stained walls could be converted into aesthetically pleasing gardens with discarded pet bottles.

Sensitising the child leaders is a good step towards ensuring that the city’s waste management practices improve over the long run, and future citizens are better aware of tackling the waste problems.