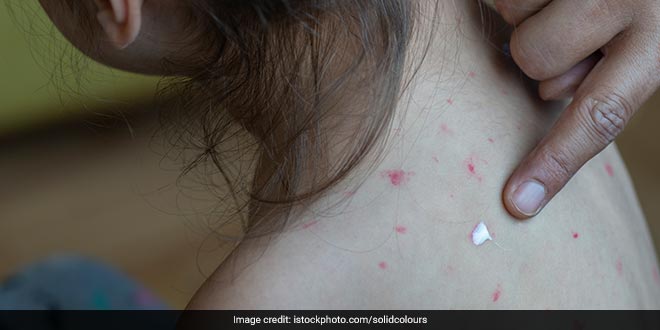 New Delhi: Amid an increase in the number of measles cases, the Centre has asked states to consider administering one additional dose of Measles and Rubella vaccines to all children, aged 9 months to 5 years, in vulnerable areas.
Recently, increased numbers of measles cases were reported from certain districts of Bihar, Gujarat, Haryana, Jharkhand, Kerala and Maharashtra. Areas under Brihanmumbai Municipal Corporation (BMC) and some other districts in Maharashtra have reported a rapid rise in infections and around 10 mortalities caused by the Measles virus.

In a letter to the Principal Health Secretary of Maharashtra that was also marked to all states and Union Territories (UTs), the Union Health Ministry said this surge is of particular concern from the public health point of view.

It is also clear that in all such geographies, the effected children were predominantly unvaccinated and the average coverage of Measles and Rubella Containing Vaccine (MRCV) among the eligible beneficiaries is also significantly below the national average.

In this context, he said a meeting of Domain Knowledge Technical Experts was held on Wednesday under the Chairpersonship of Member (Health), NITI Aayog to review the situation.

Based on inputs received from the meeting, the Centre said states/UTs are advised to consider administering one additional dose to all children of 9 months to 5 years in vulnerable areas, referring to the geographies which are showing a recent increase in numbers of Measles cases.

The special dose for Measles and Rubella for Universal Immunization Programme (UIP) reporting purposes is referred to as the one additional dose.

Also Read: Greater Efforts Needed To Get Routine Immunisation Back To Pre-Covid Times: WHO

“This dose would be in addition to the primary vaccination schedule of first dose at 9-12 months and second dose at 16-24 months,” he said.

The vulnerable areas are to be identified by the state government and UT administration in “Outbreak Response Immunization” (ORI) mode.

Since this dose of MRCV is being given to this cohort in “Outbreak Response Immunization” (ORI) mode, therefore, these children should also be covered by first and second dose of MRCV as per the primary (routine) Measles and Rubella vaccination schedule.

As the disease is known to witness a surge in cases of numbers from November to March, annually, the health ministry said an active fever and rash surveillance mechanism needs to be strengthened for early case identification.

Head count survey of all children aged 6 months to 5 years must be undertaken in the vulnerable outbreak areas to facilitate full MRCV coverage in an accelerated manner. The institutionalized mechanism of District Task Force on Immunization under the chairmanship of the District Collector must be activated to review the Measles situation on a daily and weekly basis and plan the response activities accordingly.

The disease is known to be fatal among children with moderate and severe malnourishment, he said, underlining that as part of the case identification and management, house-to-house search activities to identify such vulnerable children and provide pre-emptive care with nutritional and Vitamin A supplementation is also necessary.

Correct and factual information about Measles symptoms and treatment must be disseminated among the public, in general for early identification and prompt management of measles cases.

Any suspected cases with the development of fever and maculopapular rash must be reported and investigated, he added.

The health ministry said immediate isolation of laboratory-confirmed cases must be done for at least seven days from the date of identification.

Guidance for home-based care of such cases must be issued with reference to age-appropriate two doses of vitamin A supplementation with adequate nutritional support.

Caregivers must be made aware regarding the identification of danger signs for immediate hospitalisation of children with persistent diarrhoea, rapid breathing with chest indrawing (pneumonia), and ear discharge, he said.

The Centre also asked Maharashtra to earmark wards and beds for effective caseload management of measles in dedicated health facilities for timely transfer and treatment of such children.

The “Roadmap to Measles and Rubella Elimination by 2023” must be disseminated among District Collectors for necessary compliance and extensive community participation and participation of religious leaders must be ensured through appropriate IEC and mobilization activities to address vaccine hesitancy were other directions.

It is requested to kindly direct the concerned officials to initiate prompt action on preparedness and Measles outbreak response activities. Adequate availability of vaccines across all Blocks/Districts may be ensured for the vaccination campaign.

The Centre has also deployed high-level teams to Ranchi (Jharkhand), Ahmedabad (Gujarat) and Malappuram (Kerala) to assess and manage the increase in the number of measles cases among children there.

Related Topics:
Health Measles
Up Next