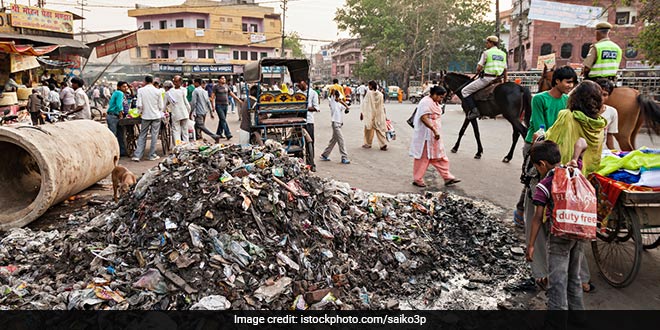 New Delhi:  A visit to the Taj Mahal at present may not fare well with tourists, as little mounds of garbage can be seen across Agra’s roads. The city is witnessing a complete shutdown of waste collection as Agra’s sanitation workers have gone on strike since May 25. The Agra Municipal Corporation’s (AMC) decision to transfer sanitation workers from one ward to another hasn’t fared well with the workers, who have gone on an indefinite strike, demanding that the transfer orders be revoked.

Agra’s cleanliness has been a worrisome issue for the city, which ranked a low 263 in 2017’s Swachh Survekshan. Agra produces a massive 960 tonnes of waste daily, and the irregularity of waste collection has already resulted in the city witnessing garbage heaps in parts of the city. Out of Agra’s 90 wards, some were witnessing regular waste collection while in others, waste was collected infrequently. This was the reason behind the Agra Municipal Corporation’s decision to shift the wards of some of the sanitation workers. The move however, backfired as many of the sanitation workers cited a complete overhaul of their daily routine due to the sudden decision by AMC. Many sanitation workers reside in or near the areas of their operation, and change of wards will hamper their daily routine, said the Safai Karmachari Union.

Municipal Commissioner Arun Prakash told PTI that only some genuine cases of low waste collection due to insufficient number of sanitation workers resulted in change of wards, but there have not been any major changes in the wards allotted to sanitation workers. The workers however, say that the shifting of wards will put them under financial strain and hence, they are reluctant to change their allotted wards.

Already entering its fifth day, the strike has had an impact in the city’s waste management scenario. Many of Agra’s important roads are overflowing with garbage as waste has not been picked up ever since the strike began on May 25. Along with waste collection, cleaning of drains and sweeping of roads has been halted as well. AMC Deputy Municipal Commissioner Vijay Kumar told PTI that efforts were being made to collect garbage with private help.