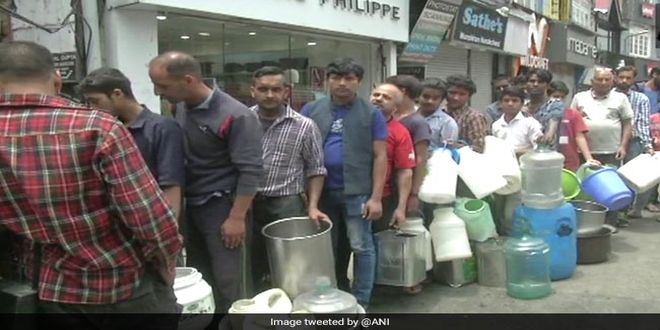 Shimla: As Shimla faces one of its worst water crises, sending locals on the warpath and making tourists cutting short their stay, environmentalists warn water scarcity not only looms large over the city but the entire Himalayan state. Himdhara, a state-based environment research and action collective, on Wednesday said a massive crisis is unfolding in the Himalayan rivers due to the upcoming hydropower projects. The water crisis unfolding in the state’s various regions, especially Shimla, needs an urgent action plan, Himdhara’s Manshi Ahser told IANS.

Citing the organisation’s “Dried and Dusted: A State of the Rivers Report for Himachal Pradesh“, she said upcoming hydropower projects, urbanization, spike in tourism, industrialisation, mining and, of course, climatic change are affecting the Satluj, Ravi, Beas, Chenab and Yamuna river basins.

Except the Satluj, which has its source in Tibet, the other rivers originate in the state.

The 2017 report warns local ecology and livelihoods are threatened by 41 big hydro and dam projects and 91 small and micro projects.

As per a 2015 report of the Indian Council of Forestry Research and Education of 2015, a total of 11,665.346 hectares in the state has been diverted for different development activities since 1980, including 62 per cent of the forest land for hydropower projects and transmission lines.

In the Satluj basin, there will 185 km of tunnels once all planned hydro projects are built, it says.

If all planned projects in Himachal Pradesh and across the Himalayas are constructed, there will be hundreds of kilometres of tunnels underneath the mountains, through which most of the Ravi, Satluj, Beas and Chenab waters will flow, and there will hardly be any long stretches of these rivers that will be free-flowing, said Manshi Ahser.

In many cases, the distance between two hydro projects is less than a kilometre with some like Rampur receiving water directly from the tail of upstream projects, impacting fish migration.

Then Additional Chief Secretary Avay Shukla, in a report to the Himachal High Court’s ‘green bench’ in August 2010, said out of the 70-km stretch of the Ravi between Chamba town and Bajoli, only three km would be in its original bed and the rest would disappear in the tunnels of the four sanctioned hydro projects – Bajoli-Holi, Kuther and Chamera II and III.

Painting a gloomy picture, a senior government functionary, requesting anonymity as he was not authorised to speak to media, said out of the state’s 9,524 natural water supply schemes, as many as 1,022 schemes have dried up in the past few years, affecting over 5.30 lakh people.

Civic body officials blame Shimla water shortage to leaks in the distribution network, a significant portion of which dates from British times and diminishing water resources due to over-exploitation.

There was too much pumping from the Gumma water source in the past few days to overcome the water scarcity of Shimla… this also resulted in mass mortality of aquatic species, due to drastic fall in the water level, said an official.

Seeking to draw the government’s attention to the crisis, 15 major environmental groups, in an open letter on March 21, called for protecting some smaller streams and tributaries, such as the Tirthan river.

Similarly, some other streams like the Hul, which meets drinking water needs of Chamba town, need to be declared as a “no-go zone” not only for hydro projects but also for large-scale sand mining and unplanned construction of roads and buildings, they said.

Garbage Piles Up In The City Of Agra, As Sanitation Workers Go On Strike Protesting Municipal Corporation’s Decision To Transfer Them