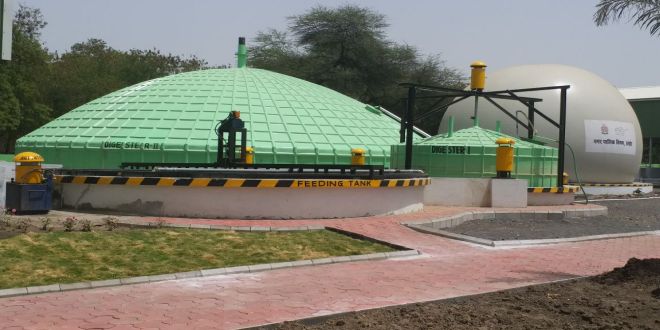 Chandigarh: The Haryana government on Thursday signed a memorandum of understanding with Indian Oil Corporation (IOCL) for setting up bio-CNG (Compressed Natural Gas) plants based on paddy straw and other agri-waste in the state. The first such compressed biogas plant (CBP) is likely to be set up in Kurukshetra. The MoU, which was signed in the presence of Chief Minister Manohar Lal Khattar, will open opportunities for setting up of 200 CBPs in the state by 2023, with a total capacity of about 1,000 tonnes per day of compressed biogas, an official statement said. This will result in annual production of about four lakh tonnes of compressed biogas per annum, it said.

Chairman, Haryana Renewable Energy Development Agency (HAREDA) Shailendra Shukla signed the MoU on behalf of the state government, while Executive Director Subodh Kumar signed on behalf of IOCL. Subodh Kumar also requested the chief minister to lay the foundation stone of the first compressed biogas plant in Kurukshetra in November this year. He said that with the signing of MOU, the IOCL would start work on the setting up of this plant.
The chief minister said that the government intends to promote agriculture waste based biomass or waste to compressed biogas or Bio CNG plants in the state to tackle the issue of crop residue burning and scientific disposal of agriculture waste. This, Chief Minister Manohar Lal Khattar said, will not only increase farmers’ income by sale of crop residue but also create rural employment opportunities.

Additional Chief Secretary, New and Renewable Energy P K Mahapatra said that the production of compressed biogas on a commercial scale will have several benefits, including reducing pollution due to crop burning and providing an economic alternative to crop residue, providing additional sources of revenue to farmers, rural employment and value creation in the rural economy. He said that the compressed biogas is similar to the commercially available CNG in its composition and energy potential and hence it could be utilised as a green automotive fuel.