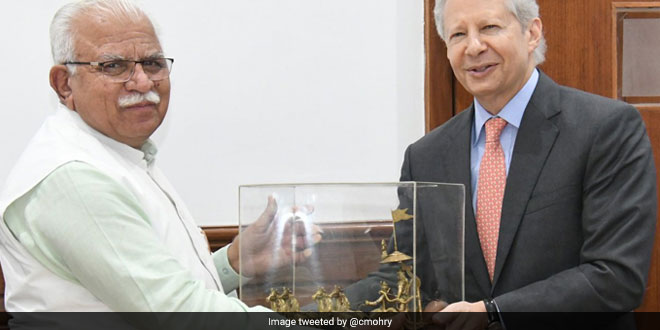 Chandigarh: The United States Of America on Wednesday appreciated the Haryana government for measures to curb vehicular and crop burning residual pollution especially in the National Capital Region (NCR) and offered all technological expertise to effectively deal with toxic air.

Ambassador of the United States of America to India Mr. Kenneth I. Juster called on CM @mlkhattar in Chandigarh today. pic.twitter.com/j4ls4U5KxX

US Ambassador to India Kenneth I. Juster, who called on Chief Minister Manohar Lal Khattar here, said both Haryana and the US could work together on this issue of great importance which would go a long way in making the entire state pollution free.

This would be a great achievement, said Mr Kenneth, adding that he is confident that Haryana would emerge as a leader in this area.

He also commended the state for declaring Haryana as a kerosene-free and Open Defecation Free (ODF) state.

Ambassador of the United States of America to India Mr. Kenneth I. Juster commended the State Government for declaring Haryana as kerosene free and Open Defecation Free (ODF) State.

Chief Minister Khattar said the state is quite serious on the issue of air pollution and has taken several steps in this direction. The thermal power plants are being converted into green energy plants and much is being done in the area of stubble burning.

We are soon going to launch a fleet of 200 buses of clean fuel in Gurugram under the city bus service scheme, a statement quoting the Chief Minister said.

He said the state is also promoting CNG filling stations.

It was also said that a global city is being developed in Gurugram, adjacent to Delhi over 1,200 acres of land. In addition, five cities on different themes are proposed to be developed along with the Kundli-Manesar-Palwal Expressway.

Hyderabad’s New Project Will Build Over 50,000 Household Toilets To Ease Pressure On Public And Community Toilets