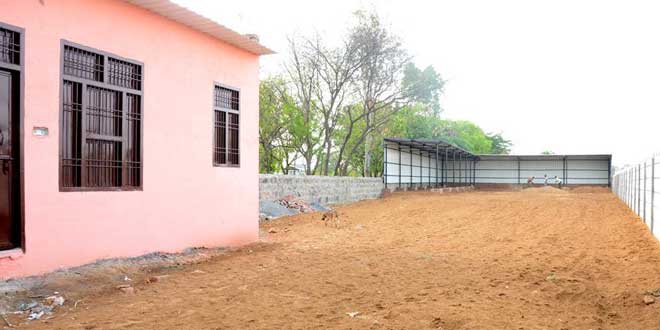 New Delhi: Karnal a city with a population of 2.87 lakhs just 147 km from capital Delhi in Haryana has been a fairly good performer in the Swachh Bharat Abhiyan, it was declared open defecation free (ODF) in August last year. 2,144 individual household toilets and 46 toilet complexes have been built by the Karnal Municipal Corporation. In the recently released Swachh Survekshan 2018, Karnal improved its rank from 65 in 2017 to 45 mostly because of its ODF status. But the city has been grappling with managing its waste. Waste from vegetable markets, slaughterhouses and households would often end up in garbage mounds proving to be a huge challenge for municipal authorities to deal with.

Part of the problem has been that composting units were not equipped enough to handle the amount of wet waste generated from the city’s markets, often amounting to 200 to 250 kgs daily. The plan to set up a waste to energy plant was in pipeline for quite some time, and from mid-2016, the Karnal Municipal Corporation began working  on setting up the plant. After procuring land on Kachwa road and completing construction within a year, the plant began functioning from February 2018. The plant has been operational since then and has been transforming vegetable and slaughterhouse waste, paddy stubble, biodegradable solid waste and agricultural waste into clean electricity and fertiliser.

Processing of wet waste was a problem we were unable to find a solution for. There was no functioning waste treatment plant in Karnal and though dry waste would be sent to neighbouring towns of Panipat or Kurukshetra regularly for processing, we struggled with managing wet waste. Since the plant became operational, processing of wet waste is no longer a problem for us, said Rohtash Bishnoi, Deputy Municipal Commissioner, Karnal.

The waste treatment plant processes the wet waste and converts it into methane, which is further utilised to generate electricity. The plant has a capacity to process 280 tonnes of waste and can generate up to 80 kgs of gas daily. The process of conversion is completely biological and the gas generated is completely pollutants free. The natural composting process in the plant can also turn the waste into a fertiliser, perfectly usable for agricultural purposes.

The plant has the the capacity to produce up to 200 kg of fertiliser. Rs 1.15 crore has been spent on setting up the plant, an amount provided by the state government. The government is presently looking at interested private organisations who can take over the operation of the plant for a period of 10 or 15 years. The electricity and fuel generated from the plant can be used commercially by whoever operates the plant during the lease period.

“With the plant operational, we can turn the waste into fertiliser, fuel or electricity. Since the capacity of the plant is to treat 280 tonnes of waste, nearby towns or cities can also send their wet waste for processing,” said Mr Bishnoi.

The civic body is hopeful that with the plant functioning fully now, the rankings are sure to improve in next year’s Survekshan.

‘We All Should Be More Responsible With The Way We Utilise Water,’ Urges Actor Bhumi Pednekar