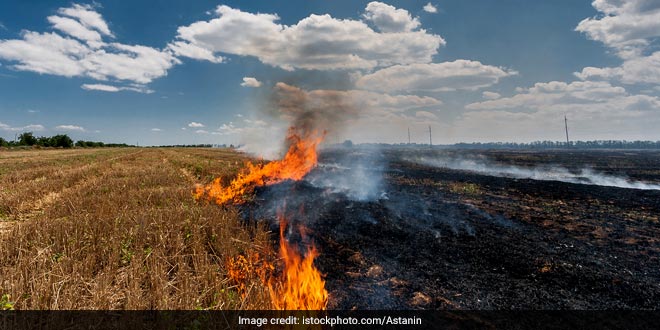 New Delhi: The Commission for Air Quality Management (CAQM) on Wednesday (September 22) said it has directed the governments of Delhi and neighbouring states to strictly implement their detailed monitorable action to tackle agricultural stubble burning, which commences at the onset of winters in north India. As a part of its winter action plan, the Commission for Air Quality Management in NCR and adjoining areas, which was set up by the central government, said it has asked Delhi, Punjab, Haryana, Rajasthan and Uttar Pradesh to adopt a standard protocol developed by ISRO for recording and monitoring the fire counts owing to stubble burning.

With regards to the promotion of the use of Bio-Decomposer technology developed by IARI, as part of in-situ crop residue management, the Commission has been informed that PUSA Bio decomposer is planned for application in six lakh acres in UP, one lakh acres in Haryana, 7413 acres in Punjab and 4000 Acres in Delhi, the commission said in an official statement. The CAQM, headed by M M Kutty, said it has also issued directions to NCR state governments, road owning agencies and municipal bodies for controlling dust from roads and open areas through a ‘Dust Control and Management Cell’.

Activities identified for effective road dust management include optimum utilisation of mechanised means of sweeping of roads, scientific disposal of dust collected in designated sites/landfills and the sprinkling of dust suppressants and water on roads and open areas, it said. It also directed proper maintenance of roads, paving/greening of non-paved road sides, greening of central verges road sides to cemented roads over bituminous roads especially in Industrial areas, monitoring and compliance of dust control measures and plantation of trees/greening on a large scale. The Commission has also issued directions for construction and demolition activities with illustrative dust control and mitigative measures and monitoring through a dedicated web portal and video fencing of projects, the ministry said.

Installation of anti-smog guns and screens at construction sites, dust-suppressants and water mist, transportation of C&D materials in covered vehicles, installation of air quality monitoring sensors in project sites and self-audit and certification mechanism by the project agencies are the key steps, it said.

For mitigating industrial pollution, the Commission informed that industries shifting to PNG/Cleaner Fuels is a priority.

It said that with a view to minimising the use of coal in industries, the governments of Haryana, UP and Rajasthan have been advised to prepare an action plan for shifting the industries to cleaner fuels in the NCR districts, where gas infrastructure is already available. An action plan is also being pursued for bringing in PNG infrastructure to those industrial areas in NCR districts where gas is not available and strict vigil on use of unapproved fuels in NCR by various enforcement agencies are some of the important measures, it said. Vehicular pollution is another major source of air pollution and the Commission has issued an advisory for mandating procurement of zero-emission and e-vehicles to give a further push to clean technologies in the transport sector. All the identified 124 border entry points of Delhi have now been provided with an RFID system to facilitate cashless toll collection thus avoiding huge traffic congestions and resultant heavy air pollution at the border points, the CAQM said.

“A dedicated taskforce is envisaged in each NCR state to continuously monitor and take steps regularly to ensure smooth traffic management, including developing an Intelligent Traffic Management System (ITMS),” it said, adding petrol/diesel vehicles which more than 10-15 years old are not permitted to ply in NCR and progress is reviewed periodically.

State-wise action plans have also been prepared for control of biomass/municipal solid waste burning and fires in Landfill Sites, focusing on the deployment of enforcement teams, quick complaint redressals and corrective actions through IT enabled platforms, it said.

Some of the other initiatives by the Commission are regular monitoring through a reporting mechanism developed by the ‘Safeguarding and Enforcement’ Sub-Committee bi-monthly.

Air Pollution One Of The Biggest Environmental Threats To Human Health, Says WHO, Toughens Guidelines