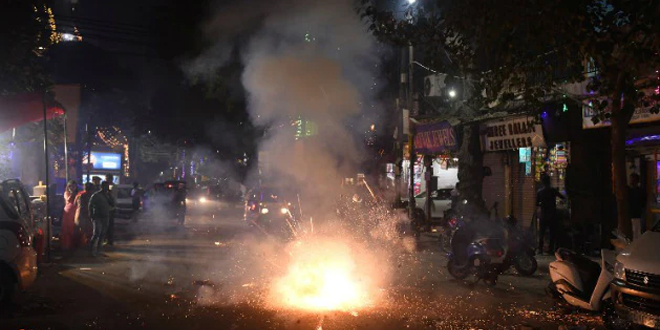 New Delhi: The Delhi government on Wednesday (September 15) banned the storage, sale and use of firecrackers during Diwali owing to the “dangerous pollution levels” in the national capital around the time of the festival. Chief Minister Arvind Kejriwal said that like last year, it was essential to implement the ban in order to save lives. “In view of the dangerous condition of pollution in Delhi during the Diwali period for the last three years, and like last year, a complete ban is being imposed on the storage, sale and use of all types of firecrackers. So that people’s lives can be saved,” he said in a tweet in Hindi.

“Last year, a complete ban on firecrackers was imposed late after assessing the seriousness of the situation. This caused losses to the traders. It is an appeal to all the traders that this time in view of the complete ban, please do not stock,” he said.

Environment Minister Gopal Rai said that the National Green Tribunal had called for a complete ban on firecrackers in poor air quality regions throughout the COVID-19 pandemic.

The data of CPCB for the last three years shows Delhi is almost in the poor pollution index. Last year, besides Delhi – Rajasthan, Orissa, Sikkim, West Bengal, Chandigarh, 13 districts of Uttar Pradesh had imposed a complete ban on firecrackers, he said.

Mr Rai said that last year, the Delhi government decided in favour of the complete ban on November 6, which was just before Diwali.

The Delhi Police had already issued temporary licences for sale of firecrackers and because of this, traders and dealers suffered losses. There were also incidents of bursting of firecrackers in Delhi by the residents due to easy availability. To avoid any such situation, we decided that the DPCC, like last year, will issue directions for complete ban on sale, use and storage of all types of firecrackers with immediate effect, he added.

If Children Contract Covid, But Are Asymptomatic, It Shouldn’t Be Matter Of Concern: Experts