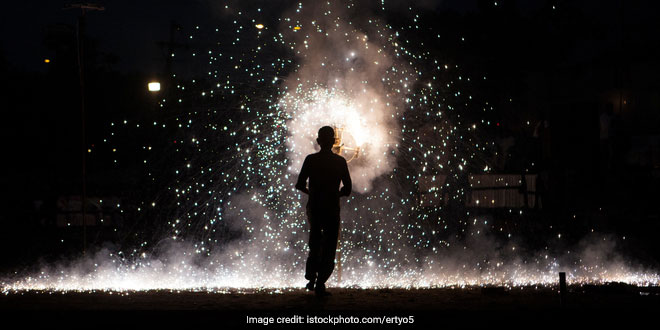 New Delhi: The Supreme Court said it needs to take into account all aspects, including the fundamental right of livelihood of firecracker manufacturers and the right to health of over 1.3 billion people in the country, while considering a plea for their ban. The top court said the Article 21 (right to life) of Constitution applies to both segments of people and it needs to maintain a balance while considering a countrywide ban on firecrackers.

A bench of justices A K Sikri and Ashok Bhushan asked the Centre to file an affidavit giving details of measures to be taken for curbing pollution and what is the effect of firecrackers on the public at large.

“There are economic aspects attached to it. The government affidavit says there are 1,750 firecrackers manufacturing industries in Tamil Nadu, which employs 5,000 families directly or indirectly. It says firecrackers industries are worth Rs 6,000 crore. We have to see what is the relevance of economic aspect on the fundamental rights,” the bench said.

There is fundamental right to livelihood of manufacturers and at the same time there is fundamental right to health for 130 crore people of this country. We have to keep in mind the cost of manufacturing and the cost of health. Although it is difficult to collect exact data of people suffering from respiratory problems and other health issues from different hospitals.

Senior advocate Dhruv Mehta, appearing for firecrackers manufacturers said regulatory provisions exist and as far as pollution or the impact from bursting of firecrackers is concerned, there is no comprehensive study on the subject.

To this, the bench said the provisions which exists are made from the point of view of safety from firecrackers but these provisions are not related to their environmental impact.

Mr Mehta said not enough material is available on record to suggest that the firecrackers should be banned due to their impact on environment and health.

The bench, replied that petitioners who are seeking a ban on firecrackers have contended that damage to health is such that it is remediless.

Senior advocate Shekhar Naphade, appearing for Tamil Nadu said the apex court had earlier directed for conducting a study and constitution of a committee, which has not been complied with.

The bench, then asked Centre what is stand and solution to the problem of pollution caused due to bursting of firecrackers.

It asked the counsel for Centre to file an affidavit detailing the short-term steps and its suggestions as how it plans to curb the pollution due to firecrackers.

The bench posted the matter for further hearing on August 21.

The apex court had on August 8 said a spike in PM 2.5 levels in the air is a severe problem as the particulate matter remains in people’s lungs, leading to serious health implications.

Firecrackers manufacturers earlier told the court that use of firecrackers should not be completely banned and it should instead be strictly regulated.

They have contended that the crackers are not the reason for increase in air pollution and there are other factors, like wind and temperature, which contribute to it.

They have said the firecracker manufacturers can be deprived of their right to do business based on statements which were not supported by facts.

On October 9 last year, the top court temporarily banned the sale of firecrackers ahead of Diwali.

Later, the court refused to relax its order while dismissing a plea by traders who had sought permission to sell crackers for at least a day or two before Diwali on October 19, 2017.

The apex court said its ban order during Diwali that year was an experiment to examine its effect on the pollution levels in the region.