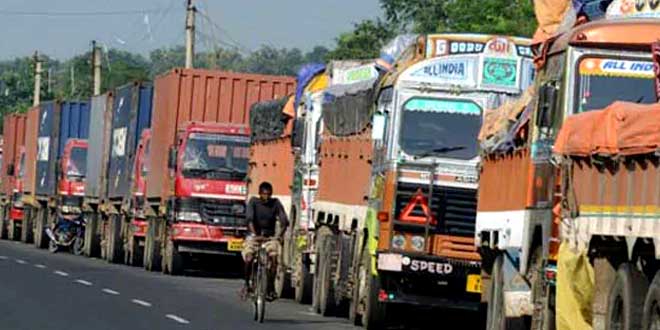 New Delhi: Environment Pollution Control Authority (EPCA), a Supreme Court appointed agency, lifted the ban on the entry of heavy vehicles into Delhi on Tuesday, four days after it was imposed due to alarming pollution levels. The authority, in a letter to chief secretaries of Delhi, Haryana and Uttar Pradesh, said heavy vehicles would now ply only between 6am to 6pm and has also given a go-ahead for construction activities within the same time duration. The move came in on the recommendation of Central Pollution Control Board (CPCB)-led task force on the emergency measures taken under Graded Response Action Plan (GRAP), amid poor dispersion, low temperatures and high humidity during night hours.

EPCA has also directed for removal of Environment Compensation Charge (ECC) and the toll on heavy vehicles so that there is no congestion on the entry points and that the accumulated trucks can enter.

Dr Bhure Lal, Chairman of the Environment Pollution (Prevention and Control) Authority (EPCA), told NDTV that diesel vehicles are one of the biggest contributors to air pollution in Delhi. The pollution control authority has also asked CPCB to consider a ban on private vehicles & commercial vehicles other than those using CNG (Compressed Natural Gas) if there is a spike in pollution and to hasten the move for putting stickers on vehicles indicating CNG vehicles. EPCA asserted in the letter,

We believe public health is of utmost priority and this emergency measure may be the only option we have. In the scenario that the weather remains adverse and that the current situation of air quality remains in ‘very poor’ or ‘severe category’ then there is no option but to direct for a complete stop on the use of private and commercial vehicles other than those plying on CNG so that pollution can be contained.

This is the second time EPCA has raised the issue of pollution by vehicles. On October 31, it had proposed banning all private vehicles but this time it proposed a ban on all non-CNG private and commercial vehicles. The restriction on the entry of heavy vehicles was imposed from November 8 to November 11 but was later extended by a day by EPCA on the recommendations of the CPCB-led task force which reviews the national capital’s air quality.

Meanwhile, environmentalists are of opinion that these measures are impractical and there is a dire need of long-term measures. An environmentalist Vimlendu Jha questions EPCA’s actions and says that it is high time that authorities actually take strict punitive actions against polluters instead of just passing circulars.

Not sure what sort of measure and 'action' is this – while pollution hits severe levels, EPCA allows construction and trucks to enter Delhi during the day. High time EPCA taken to task, for year round inaction, non-accountability and no strict action but just passing 'circulars'. pic.twitter.com/AYX44TtCWN

EPCA has also called for long-term pollution reduction measures as detailed in the Comprehensive Action Plan notified under the Environment Protection Act, 1986.