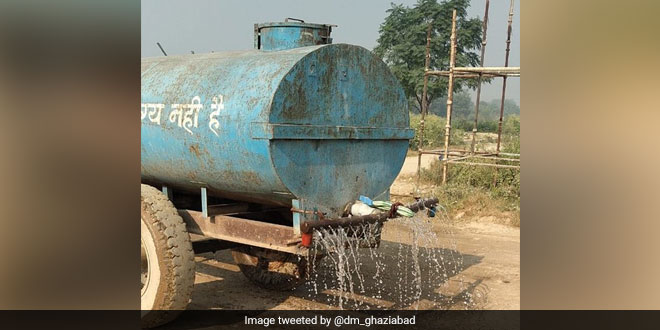 New Delhi: The industrial district of Ghaziabad is gasping for fresh air as it is currently one of the most polluted cities in the country even before Diwali, much like last year, according to the air quality data of Central Pollution Control Board (CPCB). Air pollution level of Ghaziabad worsened on Saturday with Air Quality Index (AQI) shooting up to 404 and then climbing up for four days to touch 451 on Tuesday. Pollution eased up a bit on Wednesday to dip below the 400 mark and AQI at 4pm on Thursday was at 377, which is considered “very poor”. To put these numbers in perspective less than 100 is the AQI level prescribed by National Ambient Air Quality Standards of CPCB. Prolonged exposure to such deteriorating air quality levels pose a threat of respiratory illness among people.

According to the AQI calculator of CPCB, an AQI between 0 and 50 is considered ‘good’, 51 and 100 ‘satisfactory’, 101 and 200 ‘moderate’, 201 and 300 ‘poor’, 301 and 400 ‘very poor’, and 401 and 500 ‘severe’. In Ghaziabad, the biggest pollutant identified is PM2.5 (Particulate Matter). According to World Health Organization, the major components of PM are sulfate, nitrates, ammonia, sodium chloride, black carbon, mineral dust, and water. It consists of a complex mixture of solid and liquid particles of organic and inorganic substances suspended in the air. PM 2.5 particles can penetrate and lodge deep inside the lungs and enter the blood system and may even cause lung cancer.

Ghaziabad has been ranked as the city with the highest level of pollution, according to an air quality bulletin released by the CBCB on October 29. The data says that 10 out of the 13 most polluted cities are in Uttar Pradesh. In this list, Ghaziabad is followed by Kanpur, Gurugram Bulandhshahr, Faridabad, Noida, Greater Noida, Hapur, Baghpat, Delhi, Greater Noida, Agra, Muzaffarnagar, and Lucknow.

Experts predict that the air quality will not get better anytime soon. The situation has forced the district administration to order a series of steps to combat pollution pre and post-Diwali.

Implementing Graded Response Action Plan (GRAP), which is an emergency action plan which is implemented as and when the air quality deteriorates in the city. In compliance with EPCA directives, Ghaziabad District Magistrate (DM) Ritu Maheswari has ordered stopping of construction activities and closure of air-polluting units with immediate effect.

The order by the DM will remain effective till November 10 for construction work and November 30 for polluting units. The private constructions were stopped on Monday which will resume after November 10. The District Magistrate also informed that more than Rs. 51 lakh of a fine has been collected from the violators till now.

The DM has ordered stopping of the construction work on the Delhi-Meerut Expressway, which was being done by the National Highway Authority of India, the flyovers at Rajnagar extension and Vasundhara intersection, and all developmental works of the public works department in Loni town.

In view of continued high pollution levels , NHAI has been advised to stop major construction activities on Delhi MEERUT expressway within Gzb till 10 th Nov; Few other construction works kept on hold till 10th Nov, 8 industries directed to stay closed for a month pic.twitter.com/zzSesMzCTU

Apart from this, the administration has started sprinkling water three times a day on major streets, cross streets and roads. This will continue till the AQI remains in “very poor” or “severe” category. The district administration has also deployed 100 ‘Paryavaran Mitras’ (Friends of Environment) all across the city who will keep a watch on garbage burning, construction violation, polythene use, and anti-pollution norm violations from November 1. “They are civil Defence volunteers, will report pollution related incidences every day in the concerned ward, and action will be taken by concerned officials. Monitoring to be done through mobile phone and Whatsapp,” said Ms. Maheshwari.

100 Parvayaran Mitra’s to be deployed , all across 100 city wards in GZB – to report / keep watch on garbage burning/ construction violation / polythene use/ Traffic/ pollution violations/ plantation etc from 1st Nov.

In continuation, the district administration is also launching a “Ghaziabad Rahgiri-Ek Satyagrah” campaign on November 4 which will focus on building awareness and engaging the public on ‘swachhta’, tree plantation, and anti-pollution measures. The campaign will take off from the Raj Nagar District Centre Area and new areas will be covered every fortnight under this campaign.

After Diwali, the Municipal Corporation of Ghaziabad has planned to take charge of cleaning up for which it has dedicated teams assigned to wards and areas. Jitendra Kumar Sharma, Additional District Magistrate told NDTV,

We also appeal to the public to contribute their bit in keeping Ghaziabad clean and also take care of their health. Please follow what doctors are suggesting, give a break to outdoor activities, do not burn biomass, do not add to the pollution that is already there.

Municipal Corporation of Ghaziabad will also organize a mega cleanliness rally on November 11 along with Municipal Corporations across Uttar Pradesh and sensitise residents living in their jurisdiction to keep their surrounding clean. The rally will have the participation of school students and teachers, NGOs, various government departments and common people.

National Green Tribunal Directs Haryana, Uttar Pradesh To Apprise It About Status Of Committees On Yamuna