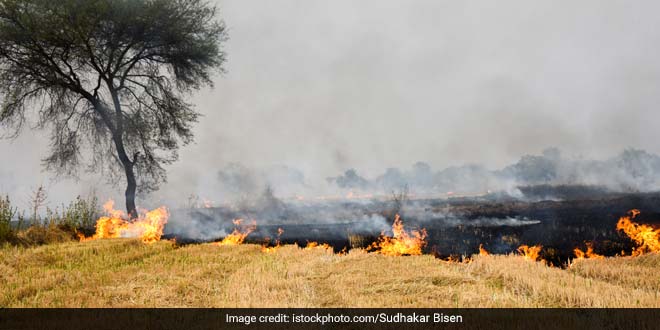 New Delhi: The Punjab and Haryana governments have submitted to a Supreme Court-mandated panel their action plans to check stubble burning — a major contributor to extreme levels of air pollution that choke the national capital in winters. The states have proposed setting up more custom hiring centres (CHCs) to give farm machinery on rental basis to farmers who cannot afford to purchase the high-end equipment for crop residue management and supplying more balers — a machine used to compress stubble into compact bales.

According to the Central Pollution Control Board, stubble burning contributed significantly to air pollution in Delhi last year with the share of farm fire smoke in particulate matter peaking to 44 per cent in November. The Punjab government has told the Environment Pollution (Prevention and Control) Authority (EPCA) that it has been utilising crop residue through biomass-based power plants and various bio-CNG projects are under process. The state has now proposed to set up a 25-megawatt solar-biomass project.

Punjab has already set up 7,378 CHCs. The state will establish 5,200 more CHCs this year to accomplish the target of having one CHC in each village. The administration will provide 220 balers this year, according to the EPCA. Farmers sell bales to nearby factories, mainly biomass plants, at around Rs 120 per quintal. Till now, the state has provided 50,185 farm machines to CHCs and individuals.

The state has also launched a mobile application to help farmers rent machinery to manage crop residue. In 2019, the Punjab government doled out incentives worth Rs 28.51 crore to farmers to cover the cost of diesel used in high-end machinery. This year, the state government has sought from the Centre, saying it will not be able to pay on its own. Last year, Punjab produced around 20 million tonnes paddy residue. Farmers burnt 9.8 million tonnes of it. These figures will be used as a benchmark for the state’s performance this year.

The Haryana government told EPCA that a committee has been set up to look into the progress of bio-CNG and bio-ethanol projects and biomass plants to manage crop residue. The state has set up 2,879 CHCs and 2,000 more will be established by October. As many as 791 balers will be supplied by the time harvesting starts. Haryana has deployed 24,705 machines, of which 8,777 are owned by individuals and the rest are with CHCs.

A mobile application is being promoted for providing machinery on rent to farmers. The state has already launched Bhavantar Bharpai Yojana, a scheme for promoting cultivation of vegetables. Around 1,09,000 hectares of land has already been diverted from paddy to other crops such as maize, millet and cotton.

Last year, Haryana produced 7 million tonnes of paddy residue, of which farmers burnt 1.23 million tonnes. The northern states of Punjab, Haryana and Uttar Pradesh attract attention during the paddy harvesting season between October 15 and November 15. Farmers set their fields on fire to quickly clear off the crop residue left behind after harvesting and before cultivating wheat and potato. It is one of the main reasons for the alarming spike in pollution in Delhi-NCR.

Despite a ban on stubble burning in Punjab and Haryana, farmers continue to defy it as there is a short window between harvesting of paddy and sowing of wheat. The high cost of manual or mechanical management of straw is a major reason why farmers choose to burn it. State governments are providing 50 to 80 per cent subsidy to farmers and cooperative societies to buy modern farm equipment for in-situ management of paddy straw, installing paddy straw-based power plants and running a massive awareness campaign against stubble burning. But these measures are yet to make any significant impact on the ground.