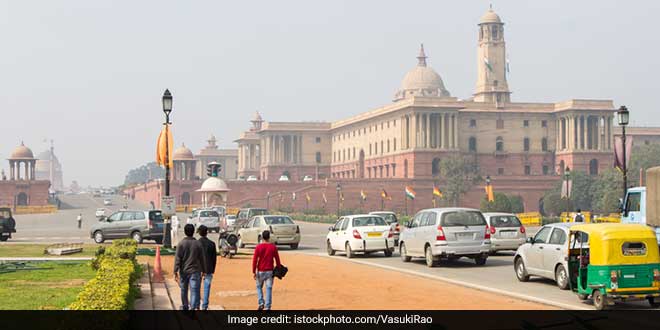 New Delhi: The year of 2019 started off ‘smoggy’ for the national capital and other parts of North India, as the air quality stayed put in the severe category, with 2018 ending with an overall air quality index (AQI) of 420. As citizens choked on the toxic smog for most of the January, this entire week saw the AQI on a roller coaster ride, oscillating between severe and moderate.

The AQI for New Delhi on Monday at 4 pm was recorded by CPCB at 404, which comes under the severe category. Simultaneously, other cities of North India with notorious air quality like, Varanasi, Agra, Kanpur, Noida, Greater Noida, Faridabad, among others, all fared between severe to very poor levels of pollution until Monday evening.

Weather conditions proved to be a major sign of relief for the millions of North Indian citizens, as Tuesday started with a light shower transforming into heavy rainfall, accompanied by fast winds due to the western disturbance, dispersing the pollutants.

The western disturbance is an extratropical storm that originates in the Mediterranean region resulting in sudden winter rains, driven by winds in the north western regions of India.

A senior Indian Meteorological Department official told NDTV, “The rains was predicted beforehand due to the western disturbance, The rainfall is not unusual, but just like snow fall on the higher or hilly regions, we saw rainfall in the national capital region and the surrounding northern areas. The wind systems sometimes build up four or five times a month, but not all of these necessarily result in rain.”

After heavy rainfall, Delhi recorded its lowest pollution levels since October as the air quality was in the ‘satisfactory’ category with an AQI of 67. Similarly, most problematic parts of North-western India remained in the satisfactory and moderate levels. Centre-run System of Air Quality And Weather Forecasting predicted the impact to last for at least three following days, but within 24 hours the AQI in the national capital region deteriorated back to poor category on Wednesday and further dropped to the ‘very poor’ category on Thursday.

According to the IMD official, as the impact of the rain subsided, the unfavourable meteorological conditions slowed down the pollutants dispersion process. The IMD official said,

Even though half of Thursday saw a gradual rise in the pollution levels in NCR, the air quality improved marginally after rain lashed parts of the city in the evening and washed away toxic pollutants, as per the authorities.

On Friday, the overall PM2.5 level, fine particulate matters in the air with a diameter of less than 2.5 micrometers, in Delhi on Friday was 152 and the PM10 level was 256, as per CPCB data. Whereas, when the air quality was satisfactory on Thursday, the average concentration 51 and 74 microgrammes per cubic meter respectively.

SAFAR has predicted that the air quality is set to deteriorate towards the “lower end of poor during the next two days as cold wave conditions as the wind speed is likely to slow down,” which was mainly helping in the dispersion of the pollutants.