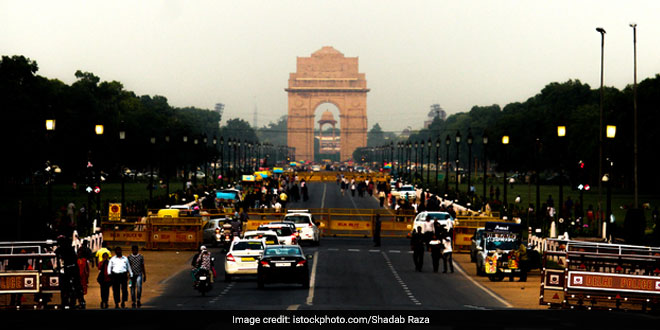 New Delhi: Delhi witnessed its cleanest day of the year on Tuesday as rains accompanied by strong winds lashed the city causing the overall Air Quality Index (AQI) to reach ‘moderate’ levels against the usual ‘very poor’ or ‘severe’.  System of Air Quality and Weather Forecasting And Research said,

Monday night’s rain along with sufficient wind speed was enough to wash away air pollutants. More than the rain, it is faster winds which cleaned up Delhi air significantly.

The agency said that although the impact of rain will last for some time, AQI is predicted to remain in the ‘moderate’ to ‘poor’ range for the next three days.

Earlier, the national capital saw ‘moderate’ air quality days in November and December, for a day each, a Central Pollution Control Board official told IANS.

The overall air quality of Delhi at 4 p.m. on Tuesday was recorded at 104 (moderate), a drastic improvement from Sunday’s ‘severe’ air quality of 404.

In the national capital, Faridabad at 87, Greater Noida at 95, Gurugram at 98 and Noida at 95 fared much better than Delhi in the ‘satisfactory’ category. Ghaziabad, however, was recorded in the same category as Delhi with its AQI at 104.

As per the India Meteorological Department (IMD), this sudden change in the weather is due to two western disturbances over the northern hills and its induced cyclonic circulation over the northwestern plains which is expected to remain till the end of the week.

The IMD said that due to clouds covering the northern plains, the maximum and minimum temperature would drop and increase by three and four degrees Celsius, respectively. An IMD official said,

According to the Met, during the next 48 hours, rains might fade away from Delhi. “There might not be rain on Wednesday, however, some drizzle is expected on Thursday,” it said. Friday onwards, rain is unlikely to occur again and moderate to dense fog might envelop the national capital.

On Thursday, across 35 areas in Delhi, where pollution is actively monitored, the average concentration of PM 2.5 and PM 10 was 51 and 74 microgrammes per cubic meter, respectively.

The concentration of PM 2.5 and PM 10 across 48 monitoring stations in the NCR stood at 50 and 72 microgrammes per cubic meter, respectively.

Kumbh 2019: This Is How Ganga Is Being Kept Clean During The Kumbh Mela