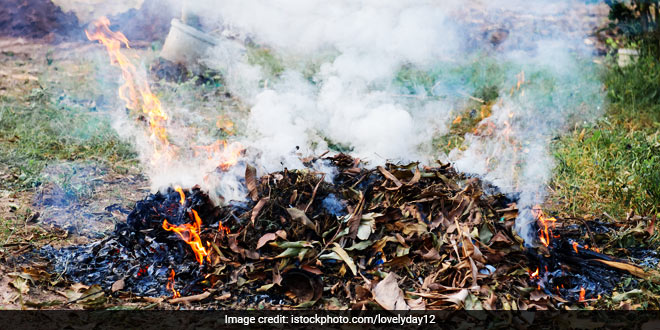 New Delhi: The rising levels of air pollution in Delhi-NCR have started making the news and setting records. According to the Central Pollution Control Board (CPCB), Delhi, Gurugram (erstwhile Gurgaon) and Noida recorded very poor air quality index (AQI) as on October 25, 4 PM. It’s the double whammy for the national capital and the neighbouring areas as now they have to battle air pollution along with the existing COVID-19 pandemic and according to the experts, both are expected to rise. Earlier this month, Union Health Minister Harsh Vardhan had very categorically stated that there is a possibility of an increase in transmission of Novel Coronavirus during winters. He had said,

These viruses are known to thrive better in the cold weather and low humidity conditions. In view of this, it would not be wrong to assume that the winter season may see increased rates of transmission of the novel coronavirus in the Indian context too.

In Delhi-NCR, air pollution also rises with the onset of winter and the festive season. A week ago, on October 18, Delhi reported AQI of 254 falling under the poor category whereas now AQI stands at 349. Similarly, AQI in Gurugram has shot up from 273 to 317 and in Noida, AQI has gone up from 252 to 362. The AQI is predicted to continue to remain in the poor and very poor category for the next few days as well.

Amidst this, the residents of Gurugram are calling for stringent action on the open burning of waste which is ideally illegal and banned. Citizens For Clean Air, a Gurugram based citizen action group, is making the authorities accountable by regularly posting videos of waste burning on social media and raising questions. The team share pictures and videos along with the date and location and tag the concerned authorities, asking them to look into the matter. Talking to NDTV on whether social media activism has helped in any way, Ruchika Sethi Takkar, Founder of the Citizens For Clean Air, said,

Indeed. When we report any incident of waste burning, we tag CPCB that issues a complaint number and marks the concerned authority say Municipal Corporation of Gurugram. The state pollution control board asks for action taken report from the municipality which puts the pressure on the municipality to work. Often the team contacts the complainant with which we get to know about the immediate local person from the government responsible for this. As an individual, we can follow-up on the complaint using the complaint ID and even check with local authorities. One needs to involve to know whether the action is taken or not and what kind of action is taken to understand the process.

Ms Takkar noted that often officials call complainant after six days of lodging a complaint and say there was no fire. Elaborating how the team tackles that, Ms Takkar said,

Waste burning is not sporadic, it’s a rampant practice. I tell my team, stop looking at the sky, look at the ground instead; you will find ash and know that these are typical dumping and burning sites. With fire, we don’t mean a building is on fire. It could be a tea vendor burning a small amount of waste or rickshaw pullers burning leaves and that kind of fire will not last for six days. When you start generating complaint numbers, it creates momentum and puts pressure on the municipality to address the active practice.

Dharmveer Singh, Social Activist and member of the Citizens For Clean Air believes that both the lack of education and information and ignorance of administration is to be blamed for waste burning. He said,

People living in slums, jhuggis, and such localities are not educated enough to understand the harmful impact of waste burning. But if something is practised regularly, it means the issue is either being ignored or missed.

But is it only a lack of information and education that pushes people to burn waste? Are there other waste management solutions available? If yes, are people not using the services provided by the government? Answering the questions, Mr Singh said,

People living in Jhuggis don’t have an option but at the same time, industries are well aware of the waste management process despite that they take the shortcut and burn waste.

Talking about waste management facilities not being made available to slum dwellers, Ms Takkar said,

Firstly, there are different categories of waste generators. From jhuggis, nurseries, squatters on roads, to sports academies and industries. But even a jhuggi is set-up on someone’s land and it is the land owner’s responsibility to provide sanitation and waste management services. Solid waste is an obnoxious source of pollution if not managed well.

According to health experts, waste management and tackling of waste burning are even more pivotal now given the fact the nation is battling a coronavirus pandemic and both COVID-19 and air pollution essentially target the respiratory system and lungs. Talking about the same, Dr Ganesh Jevalikar, Principal Consultant at Max Super Specialty Hospital in Saket and Gurugram, said,

One of the predominant damages caused by the coronavirus is to the lungs. It does cause severe pneumonia. And anybody who has any underlying problems will have a higher risk of having complications. The virus made news because it is an acute thing; it happened suddenly and has affected the globe. On the other hand, air pollution is like a chronic situation. For example, heart attack becomes a panic situation for the family and patient but years of uncontrolled hypertension or uncontrolled blood sugar are often ignored. Air pollution is something similar to that. A chronic problem that doesn’t get as much attention as it deserves. Amongst air pollution, the open burning of mixed waste is a significantly ignored area. Often there is an emphasis on stubble burning and other sources of air pollution. However, waste burning is a rampant thing.

Many states are yet to implement the Solid Waste Management Rules of 2016 in its entirety. Waste burning is considered a historical practice and it could be anything from a small fire on a dumpsite to somebody setting garden waste on fire. People are ignorant. They think that by burning waste they will clear the area and clean the air and kill mosquitoes. This is the reason we are insisting on addressing the issue of waste burning as a disease and tackling it like coronavirus. It took the Government of India 15 days to educate the citizens on coronavirus and precautions. In waste management, precautions are scientific waste management and following the 3R of ‘reduce, reduce, and reduce’. What gets reduced doesn’t get open burned or in incinerators or waste to energy plants. I feel there is a lack of awareness and the awareness and education campaign need to be as intensive as the coronavirus education. Waste management is like a disease and it needs to be addressed similarly.

Also Read: Gurugram, Faridabad To Have Pollution Control Rooms Functioning Round The Clock