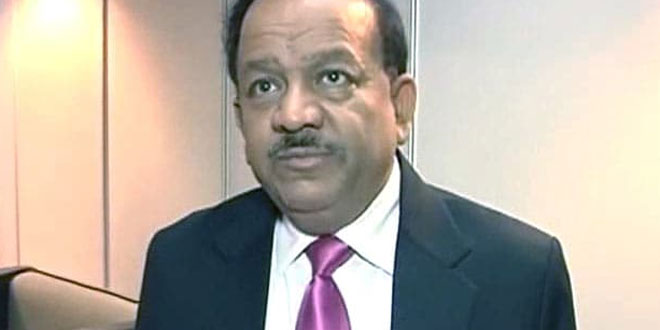 New Delhi: Union Environment Minister Harsh Vardhan has informed that the government has decided to take strict actions against the agencies that are not complying with anti-pollution directives of the Environment Pollution Control Authority (EPCA). He said that the Central Pollution Control Board (CPCB) has decided to initiate criminal prosecution against the defaulters to check air pollution. The CPCB has deployed a task force of 41 teams which shared in a review meeting that a large number of agencies are not complying with the anti-pollution directives and so the government has decided to take stringent actions against them.

As the average air quality in the national capital region inched towards severe levels, the Union Minister expressed anguish over the status of compliance of anti-pollution directives and said, “It is disheartening to know that the agencies are not following up on the complaints received on air pollution and the feedback that we have received from the teams is that the compliance rate is very poor. So we have decided to initiate criminal prosecution against such agencies or polluters. The modalities of the entire procedure will be worked out by the CPCB in the next couple of days,” Minister Harsh Vardhan said.

Currently, 41 teams are deployed in Delhi, Ghaziabad, Noida, Gurgaon and Faridabad to monitor dust mitigation and air pollution abatement activities. The teams deployed by CPCB that were earlier going on field inspection for two days a week will now be going five days a week. The Union Minister informed that the number of teams will soon be increased from 41 to 50. He further said that his ministry has called a meeting that will be held on Thursday, of all concerned agencies of Delhi and neighbouring cities to sensitise them about the issue and officially inform them about the decisions taken at the review meeting held on October 27.

It doesn’t matter how big an agency or how influential its official is, the CPCB will not be hesitant to initiate criminal prosecution against them. No laxity will be tolerated and we will not allow anyone to play with the health of people,”the Union Minister said.

Under the Environment Protection Act, there is a provision enabling regulatory agencies such as CPCB and state pollution boards to proceed with criminal prosecution in such matters. The provision includes fine, imprisonment or both. Harsh Vardhan said a warning will be issued to the agency or the polluter concerned within 48 hours of a complaint being posted on the ministry’s Sameer app by CPCB teams. If the polluter or the agency fails to take corrective measures within the next 48 hours, the CPCB will initiate criminal prosecution, he added.

The Union Minister also appealed the State governments to take stringent measures including minimisation of private vehicles and shutdown of coal and biomass industries, halt of all construction activities involving excavation, civil construction, stone crushes and hot-mix plants in Delhi and the national capital region, as recommended by the CPCB-led task force between November 1 and 10 to deal with the alarming increase of pollution in the national capital. The task force also recommended efforts to provide uninterrupted power supply in NCR towns to avoid the requirement of operating diesel generator (DG) sets.
Minister Harsh Vardhan asked the Delhi government to be proactive on addressing pollution related complaints.

He said, Our team has found that not even 10 per cent of the complaints have been addressed by the Delhi government.

The Central Pollution Control Board and the Centre-run System of Air Quality Forecasting and Research to issue separate advisories for people. The advisory recommended the public to keep windows shut, wear masks, prefer short walks, avoid strenuous outdoor exercises to minimize their exposure to the toxic air, and cut down the use of private cars during the first 10 days of November.

Adopt the practice of car pooling instead of using personal #vehicles. Not only would it reduce #AirPollution but also result in lower #fuel bills.@moefcc @ErikSolheim @UNEnvironment #Carpool pic.twitter.com/AP7aj71g1A

In the NCR region, Ghaziabad recorded severe pollution level, while Gurgaon, Faridabad, Noida and Greater Noida all recorded ‘very poor’ air quality, according to a data by the Central Pollution Control Board data on Saturday.

No Construction Site Should Be Left Uncovered In Delhi: Environment Minister Imran Hussain