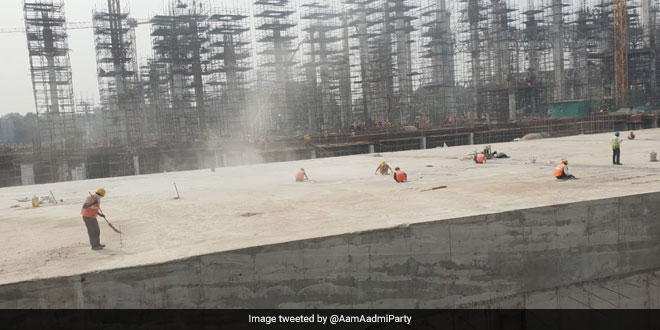 On inspection, the Environment Minister Imran Hussain found that not only are the three plants were operational, but the operators have not taken adequate measures to control the emanation of dust. It was observed that neither were there any arrangements to sprinkle water on material kept in the open ground, nor was there any provision to cover various units of RMC plants. On witnessing the violations, the Environment Minister directed DPCC to take immediate action against all the three plants for violation of environmental norms and contributing to the air pollution in Delhi-NCR.

All construction sites were without mat fencing to trap the dust. All mat covering (Green sheets) arrangements were insufficient to mitigate the quantum of dust being generated from the construction sites, reads a statement from the ministry.

The inspection was in line with Minister’s order to deal with pollution on war footing. On October 23, in a meeting with officers of different MCDs, PWD (Public Welfare Department) and other agencies, Mr Hussain asked them to be in a war mode to combat air pollution. Mr. Hussain also reviewed preparation and action plan on dust control and Graded Response Action Plan (GRAP), which is for effective check on air pollution in the city.

Current State Of Pollution In Delhi-NCR

According to the Central Pollution Control Board (CPCB), currently in Delhi, the Air Quality Index (AQI), stands at 366 that is under ‘very poor’ category with PM 2.5 and PM 10 being the major pollutant. In nearby areas like Gurugram, and Ghaziabad, AQI has already reached a ‘severe’ level that is between 400-500. The 24-hour safe standard for PM 2.5 is 25 μg/m3 and PM 10 is 50 μg/m3 24-hour mean.