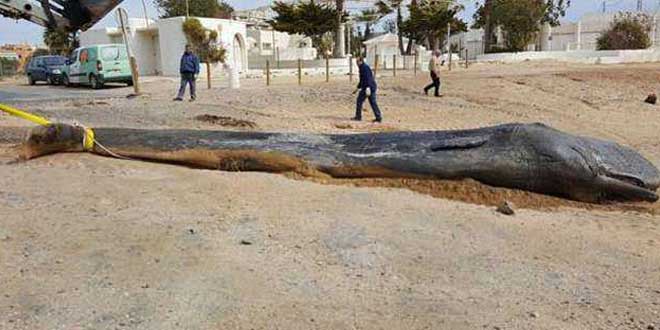 Mumbai: A sperm whale, the largest of the toothed whales, was had washed ashore dead on the Murcian coast in southern Spain after choking on 29 kilos of plastic debris. Plastic, which possesses the qualities of being versatile, lightweight, flexible and relatively inexpensive has led to over-consumption of plastic products. However disposing of products, particularly those designed to be used only once, has become a major environmental issue. And unfortunately, it is the untimely deaths of marine species due to choking on plastic waste that is reminding us of the grim reality.

“This beached juvenile Sperm #Whale was found off the coast of #Spain. If it looks emaciated, it’s because it starved to death. In its stomach was 64 lbs of #plastic, causing an infection. Our #Oceans are drowning in a sea of plastic. We need to break our addiction,” tweeted a biologist from the Spain.

This beached juvenile Sperm #Whale was found off the coast of #Spain. If it looks emaciated, it's because it starved to death. In its stomach was 64 lbs of #plastic, causing an infection. Our #Oceans are drowning in a sea of plastic. We need to break our addiction. pic.twitter.com/oICIlyGHJw

The El Valle Wildlife Rescue Center carried out an investigation after which it was confirmed that the 33-foot-long whale suffered from a gastric shock to its stomach and intestines after swallowing huge amount of plastic waste. The autopsy report found plastic bags, nets, plastic sacks, ropes, etc in the whale’s stomach and intestines.

In February last year, scientists in Norway found more than 30 plastic bags and other plastic waste inside the stomach of a whale stranded off the coast. A few months later in August a similar incident took place in the Indian state of Tamil Nadu. An endangered shark was found dead ashore on Pamban South Beach and almost 50 kilos of plastic waste was found in her belly.

All around the world the oceans are becoming clogged due to unabated disposable of non-biodegradable waste. According to a 2014 study published in a Public Library of Science Journal, there are around 5 trillion pieces of plastic floating in the world’s oceans. According to World Economic Forum, the rate of plastic dumping continues, then by 2050, oceans will have more plastic floating in the world’s oceans than fishes.

So, the next time you casually discard an item of plastic, pause for a moment and think if it is going to be the reason for the next death of a marine.

As India’s T20 Fever Makes Its Resurgence In IPL, Bengaluru Is Batting For Waste Free Matches At Its Home Ground

New Delhi: Delhi has recorded 40 deaths due to COVID-19 so far in August, a nearly three-fold rise as against...