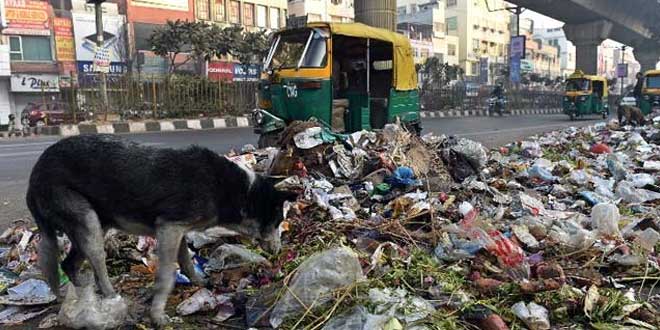 New Delhi: Garbage mounted on the streets of east Delhi as an indefinite strike by sanitation workers entered its sixth day today, even as a union claimed that sections of workers from north and south civic bodies have also joined the stir. Scores of sanitation workers of the East Delhi Municipal Corporation (EDMC), who are demanding payment of salaries due to them, clearance of arrears and medical cashless card, today also protested and burnt effigy of a senior civic leader.

“Some unions of the NDMC and SDMC have also joined our call and today they refused to work. We will intensify our stir until our demands are met,” said Sanjay Gehlot, president of the MCD Swachhata Karmchari Union.

“Tomorrow, we will dump garbage in front of the office of Deputy Chief Minister Manish Sisodia,” he said.

On October 15, they had protested outside the residence of East Delhi Mayor Neema Bhagat in Geeta Colony and also burnt her effigy.

Meanwhile, at a press conference held at the Civic Centre, chairman of the standing committee of NDMC Tilak Raj Kataria, Leader of House Jayendra Kuma Dabas and senior leader Jai Prakash claimed that the NDMC’s sanitation workers in urban areas have “not joined the stir”.

We are holding Diwali Milan with them and they also understand that it festival time and any strike would inconvenience people. So, they have told us that they are not joining it, Mr. Prakash claimed.

All three municipal corporations are led by the BJP. The opposition AAP, however, hit out at the corporations over the issue, even as its leader in NDMC, Rakesh Kumar, said, “We have urged the workers to not go on strike till Diwali at least, as it is not the fault of people of Delhi but of the civic bodies.”

He even sat on the floor of the House in protest, but to no avail, as people in the ruling party in the corporation is “not serious”.

“We have even asked for a special House session to be convened to discuss it, but it hasn’t been heeded. We have been trying to meet the L-G for two months, but have not got any response so far. We are with the workers and if needed will join their protest later,” Mr. Rakesh Kumar said.

Related Topics:
Delhi sanitation
Up Next

Crores Spent Yet Air Pollution In Varanasi Is Still Rising