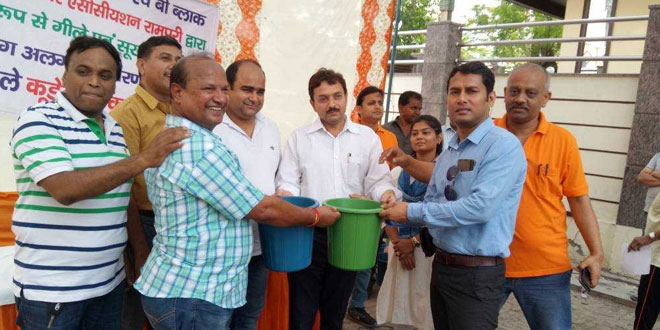 New Delhi: To encourage waste segregation among the local population, the Ghaziabad Municipal Corporation (GMC) has vigorously advocated the use of blue and green dustbins to segregate waste. Since the Pledge to Segregate movement was launched on the occasion of World Environment Day on June 5, the GMC, like civic bodies across India pledged to segregate waste and encourage the residents to do the same. The municipal corporation also announced that people would be provided green and blue dustbins free of cost, and all they needed to submit was a proof of identification and their mobile phone numbers.

The move has been undertaken by the GMC to ensure that people who belong to the lower economic strata are also encouraged to segregate waste. On the occasion of World Environment Day, around 6,000 green and blue dustbins were distributed to the residents of Ghaziabad, during a waste segregation campaign. The GMC had announced that more dustbins will be distributed to the residents, but also maintained that those who can afford to buy dustbins for themselves should do so and let the free dustbins be for people who cannot afford to buy these. Ever since the waste segregation campaign began, the city has seen nearly 30 per cent households segregating waste before handing it to garbage collectors, the civic body noticed.

When the campaign was launched, we distributed free dustbins to a lot of people. But we wanted to encourage waste segregation among people belonging to the economically weaker section of the society. Hence, all they need to do now is submit a proof of identification and their mobile number to avail a set of dustbins, said Deepak Kumar Sinha, Additional Municipal Commissioner, Ghaziabad Municipal Corporation.

The move will also help the civic body to keep a record of how many bins have been distributed to whom. By taking down identity proof and mobile numbers, the civic body will ensure that no mistakes are committed during distribution of bins and the right people receive the bins. The civic body is also keen to keep records of dustbins procured and distributed, ever since it was involved in an alleged scam of procuring 2,200 100-litre capacity dustbins for Rs 9,000 each, thrice the market price.

It is high time for Ghaziabad to adopt a concrete waste segregation programme and rope citizens to become a part of it, as the city ranked 351 out of 434 cities surveyed in Swachh Survekshan 2017. However, the civic officials of the city said that though they had a long way to go, the rankings had marginally improved when compared to the rankings of Swachh Survekshan 2016, in which the city ranked 73 out of 76. The city, which had a dismal state of municipal infrastructure incapable of handling its daily output of 950 metric tonnes of waste, is gradually upping its waste management game.

One such method of ensuring better management of waste has been the installation of Global Positioning System (GPS) in all the 203 garbage collection trucks which ply across the city to collect garbage. The devices will enable the civic body to keep a track of the vehicles and check where they are collecting garbage from and disposing it.

The most helpful development for GMC has been the progress with the new waste-to-energy plant which is to be set up at Galand in Hapur. The plant, which will cost Rs 200 crore, will also be useful in producing electricity from solid waste. The municipal corporation received 19 acres of land from the Ghaziabad Development Authority in May 2017 to begin work on the project. Given that the plant will have a capacity to treat at least 1,000 to 1,500 metric tonnes of waste daily, civic officials are confident that once the plant begins functioning, it can solve a majority of the city’s waste problem.

It Will Take 10 Years To Clean Ganga: Uma Bharti