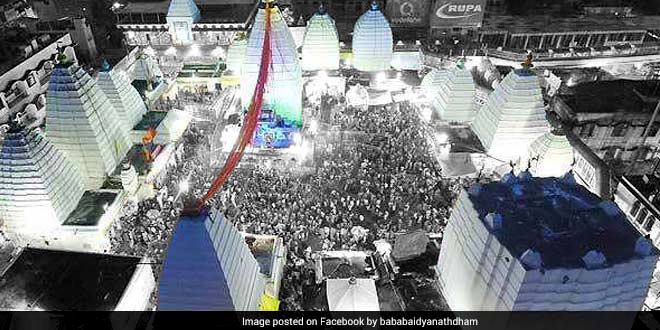 The saying ‘cleanliness is next to godliness’ has been advocated by philosophers and scholars for centuries, who opined that remaining clean and maintaing cleanliness is akin to a spiritual experience in itself. Ever since the launch of the Swachh Bharat Abhiyan, Prime Minister Narendra Modi has evoked similar emotions. The cleanliness mission is focused not just on improving sanitation conditions for Indians, but also pushes for maintaining clean surroundings in public places such as railway stations and tourist destinations. One such initiative of the Swachh Bharat Abhiyan was the launch of the Swachh Iconic Places programme. Undertaken by the Ministry of Drinking Water and Sanitation (MDWS), the programme focussed on cleaning up of heritage, spiritual and cultural spaces of the country. 20 such iconic places have been identified by the Ministry under two phases.

Phase II of the programme was launched in April 2017 and Baba Baidyanath Temple of Devghar, Jharkhand was one of the places chosen to become a Swachh Iconic Place. The temple is considered to be one India’s iconic holy places. Mythology places it as one of Lord Shiva’s most sacred abodes, with an astounding 22 temples spread over a sprawling campus of 2,479 sq.km. The temple attracts millions of visitors throughout the year, especially between July and August during the months of Shravan (monsoon). 2016 recorded the visit of 8 million pilgrims between July and August. The fallout, more the number of pilgrims, the dirtier a holy place becomes.

The number of pilgrims who visit us during the monsoon often reaches the 7 million mark. Maintaining the cleanliness of the temple throughout the year, especially during the monsoon season is a big challenge for us. Even before we were designated as a Swachh Iconic Place, we had taken measures to ensure cleanliness of the temple. Now we will step up our cleanliness efforts, said Bindeshwari Jha, temple in-charge, Baba Baidyanath Temple

One of the steps taken by the temple administration last year has been the cleaning of the temple twice a day instead of once. Till 2016, the temple was cleaned once a day from 3 AM to 4 AM. Given the increasing number of devotees, the temple since last year, kept its premises shut from 3.30 PM to 6 PM so that the main temple complex could be cleaned up. The temple authorities have also more than doubled the number of cleaners employed, from 30 to 70 in 2016. They have been provided with brooms and gloves to ensure proper protection while cleaning.

Since 2016, our daily cleanliness efforts have been increased. We have increased the number of cleaning staff and also the number of times the temple is cleaned in a day. The main Shiva temple gets most visitors so we decided to clean it twice a day, said Mr Jha.

Inside the sanctum sanctorum of the main Shiva temple, flowers and holy water carried by pilgrims was a major source of concern for the temple authorities, as in hoping to throw flower and water towards the Shivalinga the pilgrims often ended up throwing flowers and water inside the main temple’s premises. The practice resulted in piled up flower waste, as well as wastewater inside the temple by the time devotees left. To tackle this, the temple authorities made it mandatory for visitors to dispose the flower in a single spot inside the temple and not anywhere. By the day’s end, the flowers accumulated are disposed of. To decrease wastage of water, a water pouring pot inside the temple has been installed. The pot, named ‘Argha,’ allows devotees to pour water through a single channel rather than scatter water everywhere, simultaneously ensuring that they get a glimpse of the Shivalinga while doing so. 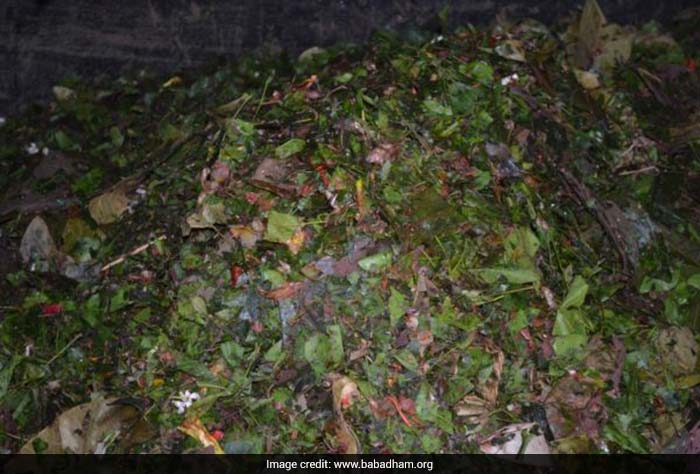 Inside the main temple, it would get dirty within hours of devotees coming in due to scattering of flowers and water from all sides. Cleaning it up would also take more effort on the cleaners’ part. Since the new rules have been set, the interior area of the temple remains relatively clean even when numerous devotees are visiting, said Mr Jha.

The biggest change perhaps, has been the disposal of leaves and flowers from the temples’ premises. Earlier, the flowers and leaves would be collected by the temple workers and disposed of near the VIP gate. The disposed waste would be collected irregularly, resulting in accumulation of more waste and stench. In May 2017, the temple authorities convened a meeting with the Municipal Corporation of Devghar. It was decided that henceforth, garbage collection vehicles from the civic body would collect the flower and leaf waste twice a day. The temple also tied up with the NGO Subh Shri, who agreed to receive the waste and use it to produce compost in their vermi compost plants. 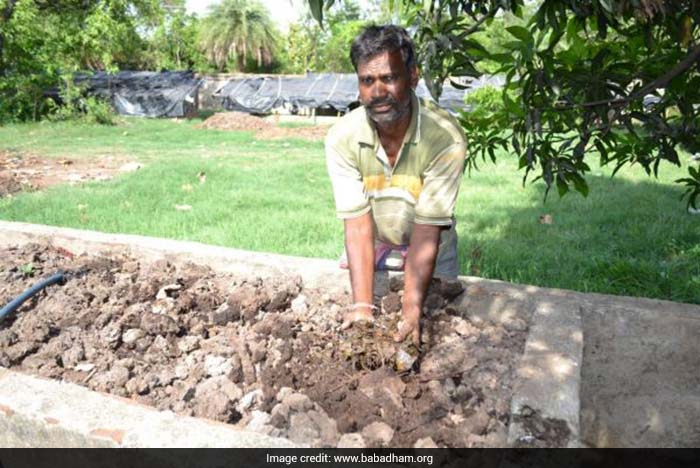 Discarded leaves and flowers are now used to make compost

The stench of discarded flowers and bhel leaves would often become too much to bear. But now these are being used for a good cause. The compost produced can be used as agricultural manure. It is good to see that even waste produced from the temple is being utilised well, says Mr Jha gladly.

Since being chosen as a Swachh Iconic Place, the temple has conducted several meetings to finalise what its Swachh agendas would be in the coming months. The temple plans to setup a functional waste management mechanism within its premises to ensure that the kitchen waste generated can be turned into compost. The authorities are also planning to display messages related to maintaining cleanliness inside the temple, so that devotees do not litter, as well as installing colour coded dustbins inside the temple premises for people to segregate and dispose waste. On being chosen as a Swachh Iconic Place, the temple will now aim to become one of the cleanest holy places in the country and shrug off the notion that religious places have a difficult time maintaining their cleanliness.

Karnataka And Tamil Nadu’s Lifeline Cauvery Is Battling With Pollution