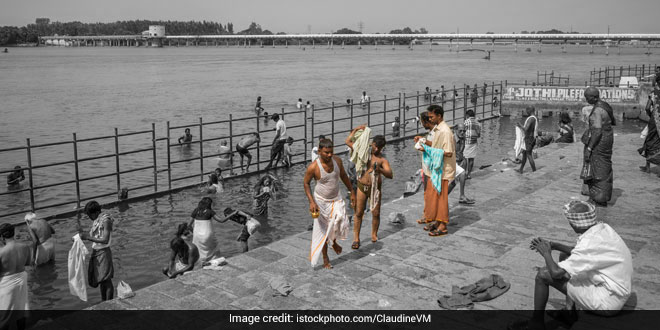 The situation for India’s rivers is no different down south, as some of the major rivers in southern India face similar problems of pollution, administrative and public apathy, resulting in widespread pollution. Cauvery, the 765 kilometre long river which flows through the states of Karnataka and Tamil Nadu has been victim of disposal of untreated effluents, resulting in the river water becoming polluted at various sections of the river. Even the colour of Cauvery’s water has changed in some places due to disposal of toxic effluents!

Cauvery faces several problems, including depleting forest cover in its banks as well as industries disposing their untreated sewage. In Karnataka’s Kodagu, the forest cover along the banks of the river has declined by 28 per cent from 2,566 sq.km to 1,841 sq.km in 20 years between 1977 and 1997. With the decrease in forest cover and increase in urban settlements, usage of water as well as disposal of human waste increased, resulting in deterioration of Cavery’s water quality. In Mysore’s Nanjangud, a total of 83 small and medium industries dispose effluents into the river. The disposal is not restricted to the small and medium scale industries, as the river also receives untreated sewage in Mandya from paper mills and fertiliser manufacturing units.

The water dispute between Karnataka and Tamil Nadu has not helped the river’s cause as attention towards the dispute has taken away focus from the river’s state and what should be done to keep it from becoming worse. The University of Mysore conducted a study in April 2017 and revealed that the river is to be put into the ‘yellow’ category, signaling the impending worsening of the water quality. The water dispute between the two states has also sparred a series of allegations, with Tamil Nadu Government alleging that Karnataka has deliberately polluting the river water, resulting in a Supreme Court order in July which asked the Central Pollution Control Board (CPCB) to file a report on the matter in six months.

Cauvery only gets national attention when conflict breaks out regarding the river’s water sharing. The river’s polluted state seldom gets coverage and needs cooperation from Central and state governments to better the situation. Two states are dependent on Cauvery and the unusable nature of the water will translate into severe problems for both Karnataka and Tamil Nadu, said Tushar Girinath, Chairman, Bangalore Water Supply and Sewerage Board.

Bengaluru, one of the major cities on the Cauvery’s banks is trying to stall the indiscriminate disposal of sewage into the river. The Bangalore Water Supply and Sewerage Board ( BWSSB) has made it mandatory for housing societies to install sewage treatment plants (STPs), but the decision maybe too late as the city discharges a daily amount of 200 to 300 MLD of sewage into the river. The BWSSB is expected to complete six more STP projects by the end of 2017. But the clamping down of industrial waste disposal across both the states is a must if the Cauvery is to be saved from further deterioration.