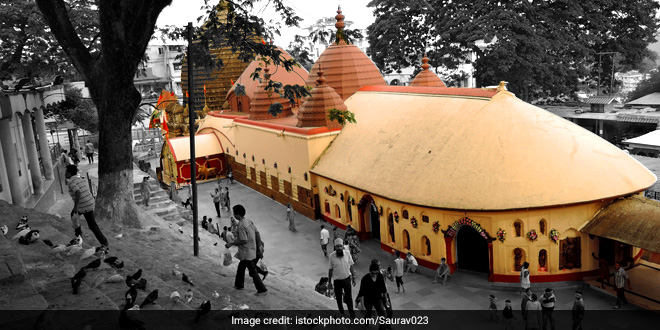 One of the highlights of the Swachh Bharat Abhiyan has been that the mission has not focussed singularly in construction of toilets. From focussing on waste management to maintenance of public cleanliness, the Swachh Bharat Abhiyan has tried to live up to its name of moving towards a clean India, in true sense of the term. Apart from the nodal ministries of Drinking Water and Sanitation and Urban Development, several other ministries, state governments and local bodies have also become involved in the mission and have taken several initiatives towards a cleaner India. The Ministry of Drinking Water and Sanitation’s Swachh Iconic Places campaign is a similar initiative to ensure cleanliness in some of India’s most iconic tourist destinations. The campaign was launched in June 2016, and Assam’s revered Kamakhya temple was included as a part of the ten iconic places in the country to be covered under the campaign in the first phase.

The Kamakhya temple has been a popular tourist destination for centuries. The temple itself dates back to 8th century BC. Considered as a one of the holiest shrines in India, Kamakhya receives millions of visitors throughout the year, especially in the month of June to celebrate the Ambubachi festival, when the numbers can go up to millions. When the Swachh Iconic places campaign for the Kamakhya temple was launched in September 2016 by Assam Chief Minister Sarbananda Sonowal, the occasion witnessed much fanfare.

Since we have a steady flow of thousands of devotees every day, it is important that we maintain the temple’s cleanliness. We have a large number of toilets and cleaning them regularly helps pilgrims in accessing them whenever required. We plan to expand our sanitation workforce to 150 from the existing 80 to ensure faster cleaning of toilets, said Bhupesh Sharma, secretary of the Kamakhya Devalaya Management Committee.

The temple authority also set up a record 700 temporary toilets and 400 bathrooms, along with 1,000 water taps for visitors this year in June for the occasion of the Ambubachi festival. The waste generated from these temporary sanitary settlements was transported by trucks supplied by the Guwahati Municipal Corporation (GMC). Though a temporary arrangement, the effectiveness of it was proven by the end of the festival, attended by nearly 3.5 million people. The temple authorities did a commendable job of ensuring that despite the huge numbers, the basic necessities of sanitation were successfully taken care of.

Apart from the festival, the temple in general receives numerous devotees throughout the year. One of the temple’s iconic spots is the temple pond which sees devotees taking a dip every now and then, resulting in heavy pollution of the pond water. The state government in February 2017 approached the Bhabha Atomic Research Centre (BARC) to set up a water treatment plant for the pond in the temple. Two BARC members inspected the temple and recommended measures such as regular de-silting and sludge removal, restricting disposal of any kind of waste, washing or immersion of idols, training of staff to maintain the water treatment plant. The plant will take up to a month to be installed and cost Rs 1 crore, along with additional expenses for operation and maintenance. The project is being implemented by the Kamakhya Devalaya Management Committee under the supervision of Swachh Bharat (Urban) mission director.

The treatment plant will clean up to 30,000 litres of water every hour. We get a huge number of devotees who use the water from the pond daily. The treatment plant will ensure regular cleaning of the water. We also plan to tie up with some local companies to ensure the plant’s maintenance so that fixing any problem will not take much time, said Mr Sharma.

The temple had also setup a solid waste management plant in November 2016 as a part of the Swachhta Abhiyan pilot project. Solid waste management was one of the points raised by the 5-point action plan drawn up by the Management Committee. The waste management plant was set up by the temple authorities in collaboration with the Department of Tourism, Assam and Guwahati Municipal Corporation. The plant is capable of treating 40 tonnes of waste at a go and was funded by Coal India Ltd. as a part of its Corporate Social Responsibility (CSR) initiative.

Efforts By Other Bodies

The Guwahati Municipal Corporation (GMC) has also done its bit in improving the cleanliness condition of the area. Plastics and other non-biodegradable waste materials are prohibited in Nilachal Hill, the place where the temple is situated. The municipal corporation has installed nearly 200 dustbins in Nilachal, leading up to the temple so that any waste is disposed outside the temple itself and doesn’t enter the temple premises. Only biodegradable items are allows inside the temple. The entire area of Nilachal has been declared a no-tobacco zone to ensure no tobacco waste is generated.

To minimise waste from entering the temple premises, we have installed several dustbins in Nilachal. People can dispose waste in them. The entire zone is a no tobacco zone so that people do not pollute the region with any form of tobacco waste, said Montu Daimary, Deputy Commissioner, West Zone, Guwahati Municipal Corporation.

The temple has done considerably well since the Swachh iconic programme was launched, though certain aspects of the programme are yet to be worked upon by the temple authorities. Chief among these is the installation of e-toilets and solar lighting and expansion of parking spaces to accommodate more cars and allow safer movement of pedestrians around the temple. But the temple authority is hopeful of improving its performance in these aspects with time. With the implementation of green technology, 100 per cent coverage of sewerage lines and creation of more space, the temple will become an iconic tourist destination, and a hallmark of Swachh Bharat Abhiyan’s success.

Also Read: India@70 #SwachhIconicPlaces: In The Divine Abode Of Tirupati, Making It Possible For Cleanliness To Reside Next To Godliness

India@70: Shortlisted To Be A Swachh Iconic Place, Here’s How Taj Mahal Fares So Far