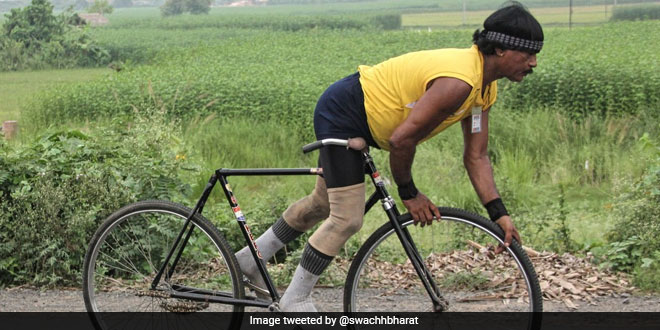 Kolkata: Speeding cars pulled over and pedestrians stopped by on a busy central Kolkata street on Friday afternoon seeing a middle-aged man strangely bending forward on his bicycle and spinning the front wheel with his hands. But while the cyclist’s incredible balance impressed many, his aim to achieve the near-impossible seems more stunning. Aiming to promote Prime Minister Narendra Modi’s Swachh Bharat Mission, Debendranath Bera, a BJP activist from West Bengal, has set out on a unique journey to travel more than 22,000 km across the country’s 33 states and union territories on a bicycle that neither has brakes nor a seat or a rolling chain.

A resident of West Midnapore district’s Sabang, Bera started his voyage from the district’s Debra block on June 17, with his nephew who would accompany him across the country on a normal bicycle.

Before restarting his journey from BJP’s state headquarters at central Kolkata’s 6, Muralidhar Sen Lane, Bera claimed he would not only create a world record but also hoped to influence thousands of people about cleanliness if he got their support and encouragement.

I will travel more than 22,000 kilometers. I will go the capitals of all 29 states in India and a few union territories to spread awareness about the Swachh Bharat Mission. It will take me almost a year to complete the journey on this bicycle. I hope to inspire people to fulfill the government’s dream of building a ‘Swachh Bharat’ (clean India),” said Bera, who has been practising the art of riding the rather peculiar contraptions for the last 25 years.

Also Read: Go Swachh, India: A Man Cycles From Kargil To Kanyakumari To Spread The Message

My cycle does not have any brake, gears, chain or seat. It is extremely tough riding such cycles for a long time, let alone travel across India. I seek support and encouragement from everyone to complete my journey. I hope to see my name in the Guinness World Records as no one has ever travelled such on a cycle like this, he said.

A stuntman by profession, Bera has often left locals mesmerised with deadly feats like pulling big buses with his hair or lifting pick up vans on his chest. However, the 45-year-old said his mission to travel across India is the closest to his heart as he is doing it for a noble cause.

I am a BJP worker. I am getting all kind of support from the party at the local level. It has also promised to help me out in every way in all the states I am planning to go to, he said.

He also hoped to get the support of the state’s Trinamool Congress government.

I am sure everyone would come forward to help me out irrespective of their political preference, said the cyclist, imbued with a spirit of adventure.

Bera and his cousin Akash Kumar Karan would enter Assam from Bengal and travel through northeastern states. They would then go to Bihar and Uttar Pradesh, before traversing the rest of the country.