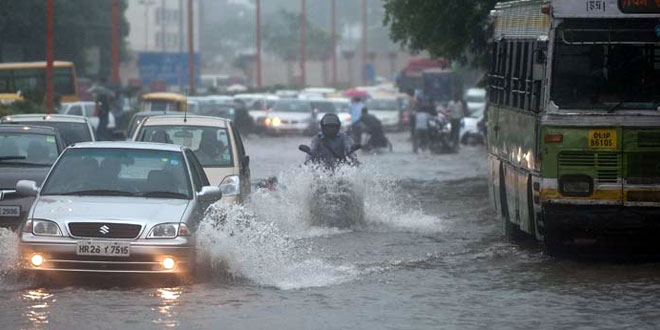 New Delhi: The second last week of June saw air pollution in Delhi reaching alarming levels, but rainfall in the last two days has brought respite from not just the scorching heat, but also from the pollutants in Delhi’s air. The Central Pollution Control Board’s Air Quality Index (AQI) for June 28 labelled Delhi’s air as satisfactory, with an index value of 76. The particulate matter (PM) 10 level for June 28 was 70, compared to the average of above 250 usually found in Delhi’s air. The CPCB also stated that this was Delhi’s best AQI since August 2017, signaling that Delhiites were breathing unhealthy air for nearly a year.

The air quality of Delhi is slated to improve further in the next few days as Delhi is scheduled to receive more rainfall, as per the meteorological department’s prediction. System of Air Quality and Weather Forecasting and Research Institute (SAFAR) said that more rainfall will clear out the dusty air usually prevalent in Delhi, and may bring it to the level of ‘good’.  Air quality is considered good when the AQI is between 0 and 50.

The rise in severe air pollution during the second week of June, when PM10 levels rose up to 900 in some places, was attributed to dust storms in Western India. Construction activities in the capital were halted June 14 to 17 to ensure that the situation did not worsen.

Delhi, which is among the most polluted cities in the world, witnesses severe dip in air quality during the winters. The recent air pollution crisis had Delhiites worried, with many apprehensive that air pollution may become a summer phenomenon. In the already polluted capital, the decision to axe 17,000 trees by the National Buildings Construction Corporation (NBCC) for a proposed housing project drew further flak from all quarters, citizens and activists alike, before the Delhi High Court put a stay order on the cutting of trees till July 4. Environmentalists felt that the felling of 17,000 trees would drill a severe hole in Delhi’s green cover, and would degrade the city’s air quality further.

With Delhi’s air quality scheduled to improve in the next few days, Delhiites will get a respite from breathing pollutant laden air. Delhi’s Lieutenant Governor Anil Baijal met Delhi Environment Minister Imran Hussain today and discussed a massive tree plantation scheme to be undertaken by the government from July 15. The government will plant 28 lakh tree and shrub saplings, with emphasis on native and fruit bearing trees. The Lt. Governor also spoke about the necessity of an information, communication and education (ICE) campaign, to ensure care and maintenance of the trees post-plantation.