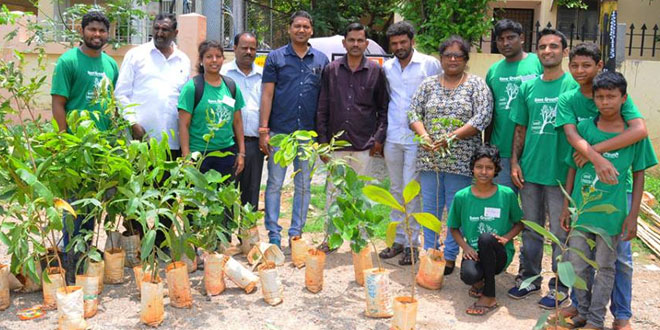 Mumbai: Picture this: A group of strangers walk up to your doorstep and stick or nail posters. Such a treatment is meted on a daily basis to thousands of trees across India and unfortunately the trees cannot even raise a voice. Understanding the plight of trees, a few environment-conscious citizens in Bengaluru are on a mission to help the trees live. City-based Save Green NGO, which was started in 2009 to plant trees, recently shifted its focus to the posters, ads, hoardings and ferry lights suffocating the trees. Their aim is simple – to remove anything that is punched into a tree by a human.

On one hand where authorities are cutting trees in the name of development, a few people are hurting the trees for their personal gains. Many big companies advertise their products through posters by sticking them on the trees, in some cases even nailing them. Nailing a tree creates holes that give access to termites and insects. The advertisement companies often inject the trees with mercury and sulphuric acid making its tissues weak. Once a tree becomes weak, the companies approach the civic corporation asking them to cut it, Hemant K, Founder and President of Save Green tells NDTV.

In course of our mission to plant trees, we realised that merely planting them is not enough. The whole purpose is defeated if the trees are not taken care of properly.

A minimum of 2 feet of space should be given to the tree so that there is place for mud and water to percolate to the roots properly. The shop owners cement the trees without any permissions. It is strange to see how they are carving out places for humans to sit at the cost of trees, which by the way supply oxygen to humans, adds Hemant.

Solving The Problem, One Tree At A Time

Two years ago, the NGO first conducted a survey and on the companies that put ads on the trees and made an excel sheet. For the next one month, they made calls to more than 50 companies and requested to remove the ads and in future refrain from doing so. While some agencies agreed and stopped the nuisance, the others continued to do it. 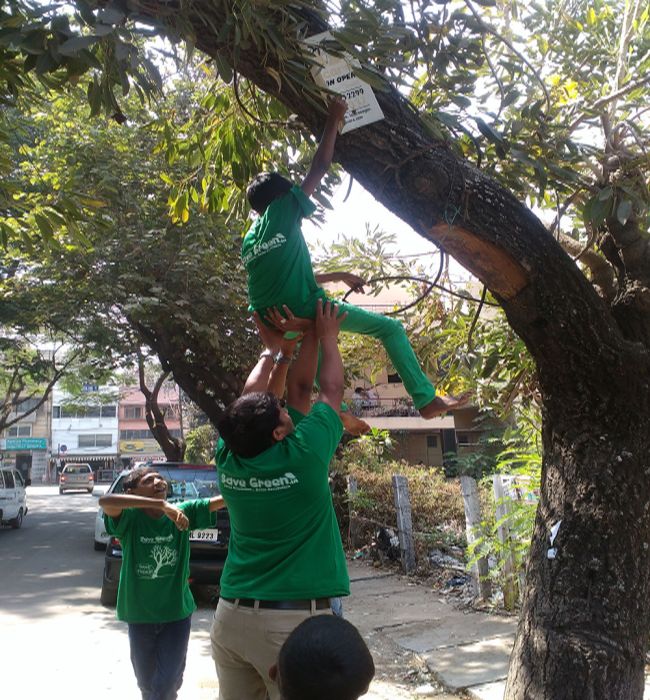 The NGO conducts a drive every Sunday to remove the banners, posters from 11AM to 2PM.

The NGO began its drives, a month later, against the ads and on every Sunday, the volunteers visit the trees around the city to remove the banners, posters from 11AM to 2PM.

It doesn’t matter how many times and till when we will have to continue our drive because if we are removing posters this week, the companies stick them back the very next week. When we approached the Bruhat Bengaluru Mahanagar Palike (BBMP) for help, they told us about ‘The Prevention of Disfigurement Act, 1981’. As per the act it is a crime to paste unauthorised ads on trees. Under the act, we started to file complaints against the perpetrators and so far, we have filed more than 20 complaints, says Hemant.

Also Read: Tree Man Of Haryana: This Constable Is On A Mission To Make Sonipat Green

While removing ads maybe relatively easier, breaking the cements around the shop is a challenging and risky job points out Hemant. Though it is not legal to put cement around the trees, the NGO wanted to make sure that they are not violating any law by breaking the cement structure and so they approached City Mayor Sampath Raj, earlier this year, who gave them an approval.

Cement structures around trees suffocate them: Save Green

Armed with hammers, pickaxes and other tools, the NGO that comprises professionals, students and citizens activists, recently broke down concrete footpaths in Jeevanbhemanagar and Indiranagar. The exercise at Indiranagar, however, quickly escalated into a brawl when the shop owner threatened the group.

They warned us of having ties with some influential people and asked us to stop our activity. We simply asked them if they had acquired permission to use the space outside their shop. And because they had not, we were able to finish our task.

The NGO has list a of shop names and areas where trees are getting suffocated due to human encroachments. In its ninth year, the NGO aims at ticking each of the name from the list one by one and no amount of threats or oppositions can stop their work, affirms Hemant.

Almost a decade ago when Hemant was waiting at the Shivajinagar bus stop to go home from work, he noticed something unusual about the road he took every day. The trees that provided shade to the sides of the road was no longer there, it had been cut. In the same week he read about the trees being cut due to metro construction. It was then when Hemant decided to take the matters in his own hands and plant trees in the city. He gathered the like-minded people and started to plant trees in colonies on a monthly basis.

Every month we identify a colony where there’s enough space to plant trees and chalk out our plan. On visiting the colony, we request the residents also to take part in the plantation drive so that they can monitor and water the trees, says Hemant.

Every month, the NGO tries to plant a minimum of 50 saplings and once the trees are planted, volunteers visit the places to ensure that the trees are protected by the residents. So far, the NGO has managed to plant a whopping 12,000 tress across the Green city.

Once Infamous As A Littering Spot, Bengaluru’s Jakkur Lake Is Now Known For Its Lush Greenery