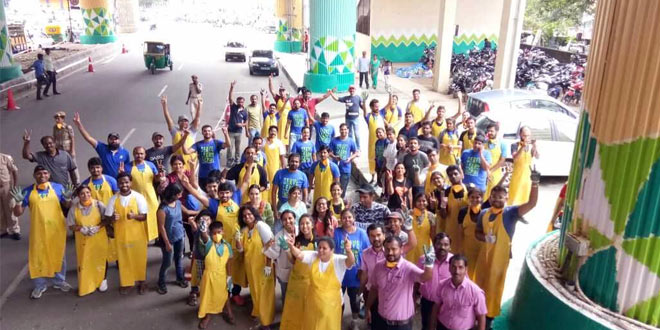 Ugly Indian, a group that cleans up Bengaluru, used their long weekend this week due to Gandhi Jayanti to renovate the areas near the JP Nagar Metro Station. The Ugly Indian group which believes in changing the psyche of people has been working in this arena since last four years. The group basically identifies a pillar, especially the ones near metro stations which are unclean and revamp it through paintings.

“A city is judged by the way its public spaces are maintained. Bengaluru has made its mark in the IT sector, so this is our opportunity to contribute in making the city more beautiful. Once the place is made attractive and pleasant looking people think twice before littering and that is how we try to deter citizens from dirtying the place,” said one of anonymous volunteer. 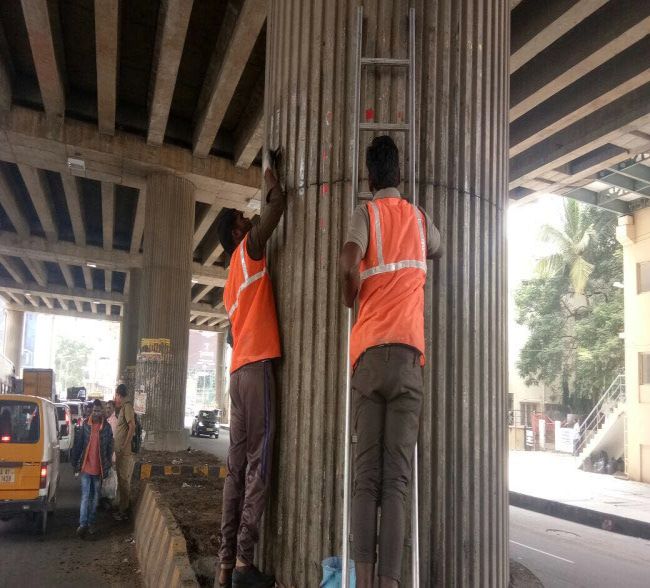 The painting activity has become a regular thing for the group. In last two years they have successfully painted 200 metro pillars and 600 other pillars and the place has retained its new look. “No posters have been stuck, or garbage thrown after we beautified those walls with pleasant colours,” said another volunteer. 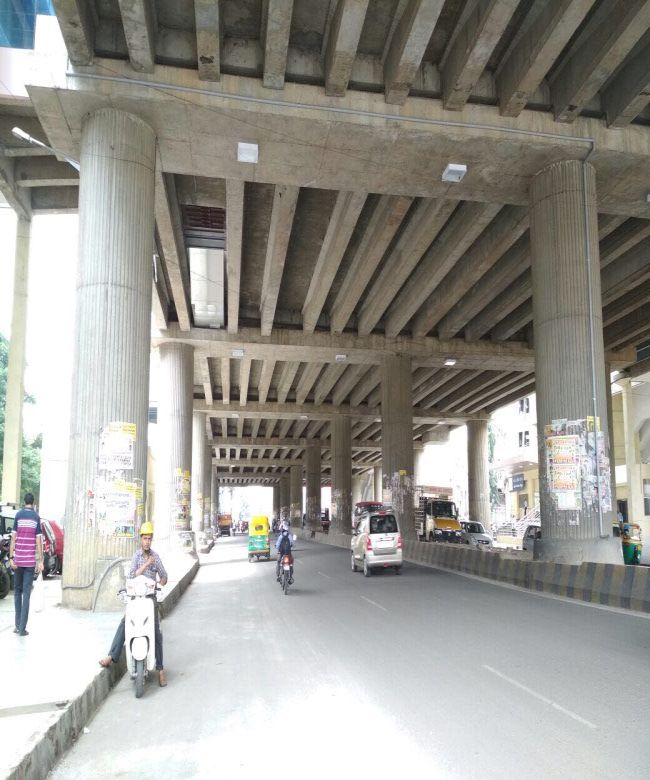 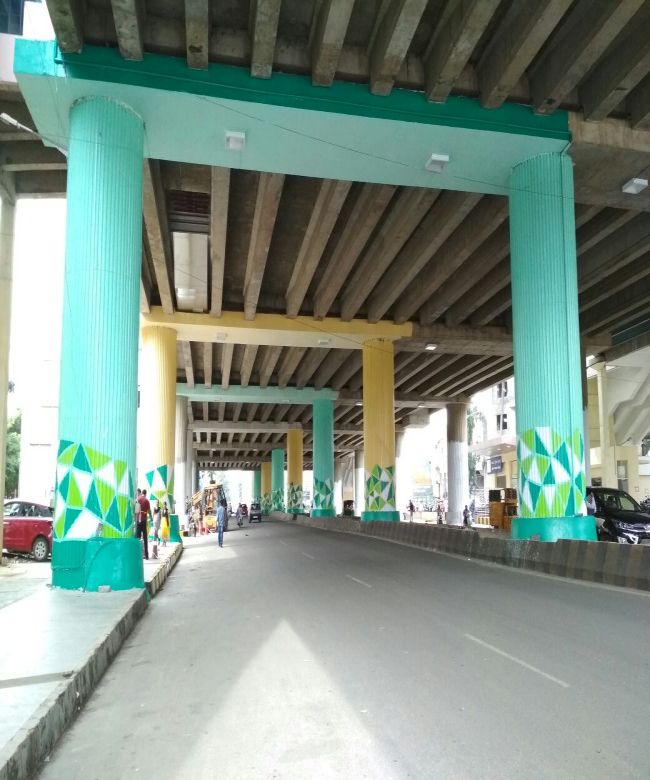 Besides the volunteers of the group, people working in nearby companies also joined the cleanup event. Hailing the concept of #Mere10Guz (cleaning 10 yards of one’s surroundings) which was the theme of the 12-hour Cleanathon, a staff from one of the companies said, “Most of the employees commute by the metro on a daily basis and it is nice to pass by a beautiful set of pillars everyday. Since most of the companies are geographically placed in clusters, if every company pledges to keep their 10 yards clean then majority of the city will remain clean on its own.” 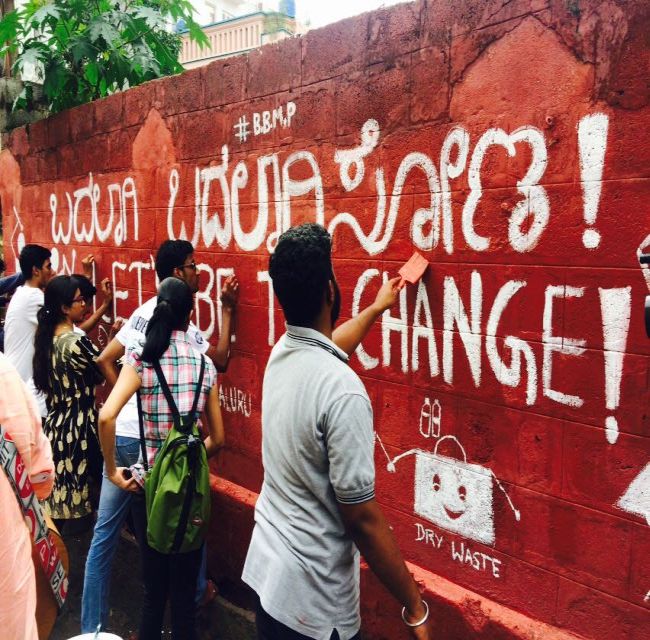 The relentless effort of the group was lauded by the Swachh Ambassador Amitabh Bachchan himself.

I think it’s a wonderful initiative and example for other metro cities like Mumbai and Delhi to clean up their metro areas. Such activities are prime examples of what an individual’s effort towards Swachh Bharat Abhiyan can do. If we don’t involve ourselves personally, then this campaign will not move forward, commented the legendary actor.

He further inquired about the selection of colours and patterns to which one the volunteers said, “a lot of thought goes into deciding the colour and its shade. Apart from the colour being soothing, we make sure that we do not cross any ethnic, political or religious lines. The colour has to be neutral and universally right without it offending anyone.”

Considering that most of the volunteers are not professional artists, the pattern is kept simple yet attractive and the 2-3 feet of the pillar bottom is always painted in dark colours as it is in the bottom areas where dirt particles accumulate the most. 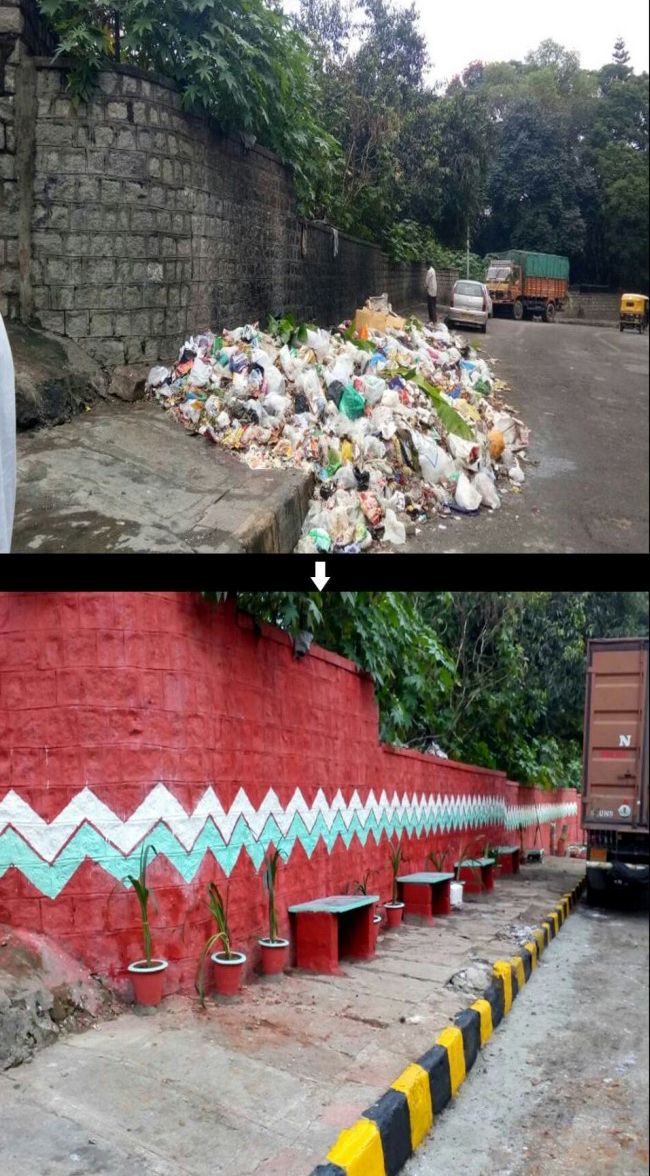 The activity is highly supported by the local municipal bodies who at times even invite the team to transform a city’s wall. “It is a partnership between government and citizens with a cause to defeat ugliness,” added the volunteer. 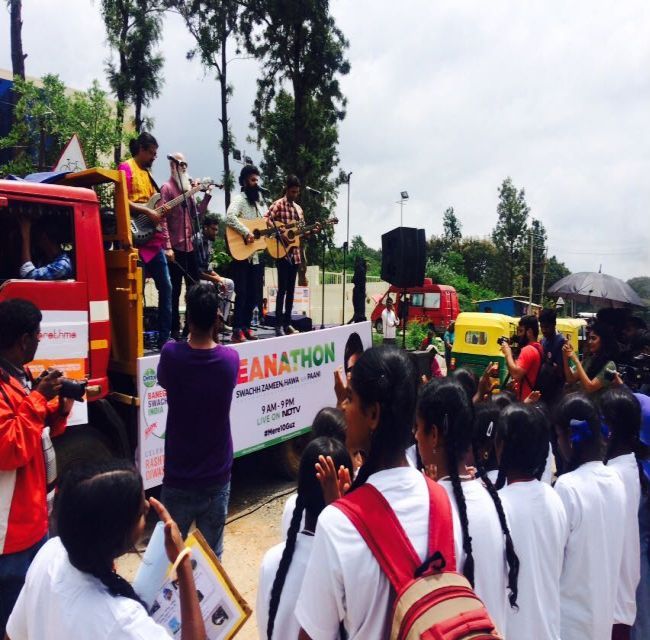 While these Swachh warriors were revamping the metro area, a few residents carried out similar drives in other parts of the city, as part of the Cleanathon. For instance, garbage near the JP Nagar Citizens Park area and near the Banashankari temple was first cleared by the citizens, post which they painted the walls. As the locals along with a few volunteers from Australia and Bengaluru’s school children engaged themselves in the cleanup activity, a band named Swarathma kept them entertained with fine musical tracks. To encourage the noble work, Kannada actor Samyukta Hornad was also present.