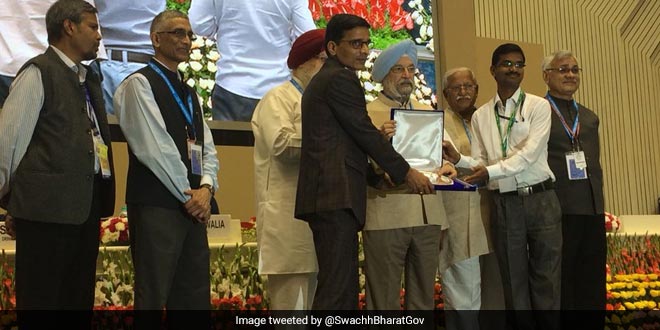 New Delhi: Prime Minister Narendra Modi on the 148th birth anniversary of Mahatma Gandhi felicitated different states, cities, districts, citizens, corporates and religious groups for their extraordinary work and contribution towards India’s biggest cleanliness drive – the Swachh Bharat Abhiyan which was started in 2014. The swachhta awards were held at Vigyan Bhavan in the capital on October 2 by the Ministry of Housing and Urban Affairs and the people were honored for their efforts that were distributed into seven categories. From efforts for toilet building to effective waste management techniques, achieving open defecation success, organising cleanup drives and promoting zero-waste lifestyle, the awards covered every Swachh efforts.

Addressing the masses on the occasion of Gandhi Jayanti, PM Modi spoke about how Swachh Bharat Abhiyan has become a jan andolan. He added that Swachhta cannot be realised even if all political leaders in history came together for it – it can only be realized when 125 crore Indians come together for it. PM Modi also said that the successes achieved in the Mission so far have not been an accomplishment of the government, but of the people of India who have made this dream of a Swachh Bharat their own.

Also Read: #SwachhataHiSeva Recap: Here’s How India Cleaned Up Their Surroundings To Mark 3 Years Of Swachh Bharat Abhiyan On October 2

Talking about the winners of the Swachhta Awards, Coimbatore was awarded for innovative design of women-friendly tricycle for waste collection, whereas the Pemayangtse Monastery in Gyalshing, Sikkim was awarded for being a zero-waste monastery

The Pemayangtse Monastery in Gyalshing, #Sikkim was awarded on #SwachhBharat Diwas for being a zero-waste monastery.#MyCleanIndia pic.twitter.com/PZ1XR3uzEm

Roseland Housing Society in Pune was awarded for their 3-ways segregation system. Apart from these, various self-help groups were also felicitated – Swachh Ambikapur Sahakari Samity from Chhattisgarh, Mahi SHG from Durg, Chhattisgarh to name a few.