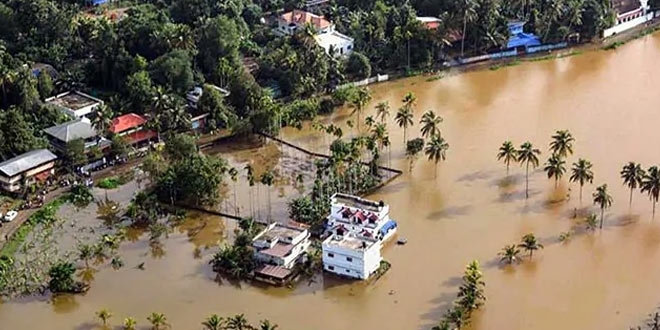 Washington: The prediction of high impact climate phenomena can be substantially improved by a new mathematical approach that analyses the connectivity and patterns between geographical locations, scientists said in a new publication. This can potentially save thousands of lives and avoid billions in economic losses. Prediction times for events like El Nino, monsoons, droughts or extreme rainfall could be increased substantially, to a month or in some cases even a year in advance, depending on the type of the event.

Also Read: Was COP26 Glasgow Pact A Win For Climate? Time Will Tell

The new framework can thus become key for improving adaptation to the global warming crisis. The findings were published in the Proceedings of the US National Academy of Sciences (PNAS).

“The new forecasting approach has, in several instances over the past years, proven to be highly efficient in predicting different climate phenomena much earlier than before. El Nino for instance could be predicted up to one full year early, compared to about six months with the standard prediction methods,” explained Josef Ludescher from the Potsdam Institute for Climate Impact Research (PIK), lead author of the ‘Perspective’ article published in PNAS. Ludescher continued,

The onset of the Indian Summer Monsoon in central India, vital for the economy in this region, was predicted more than a month in advance, much earlier than the forecast currently used, thanks to the new approach.

Extreme events like floods, heatwaves or droughts often arrive with little or no warning time at all, making effective short-term adaption challenging if not impossible. The new prediction framework fundamentally improves this, as Jurgen Kurths from PIK, a pioneer of network application to climate-phenomena forecasting and co-author of the paper, underlined. He told,

Currently, for instance, there is no reliable prediction of heavy rainfall in the Easter Central Andes leading to floods and landslides with devastating impacts for the inhabitants in that part of South America. Our network-based approach can predict those events up to two days in advance – that is crucial time for the people to prepare, save lives and limit damages.

A mathematical approach to help save lives Traditional weather and climate forecasting rely predominantly on numerical models imitating atmospheric and oceanic processes. These models, while generally very useful, can’t perfectly simulate all underlying processes and phenomena like monsoon onsets, floods or droughts might be predicted too late. This is where network-based forecasting comes into play. Ludescher explained,

“As opposed to looking at a huge number of local interactions, which represent physical processes like heat or humidity exchange, we look directly at the connectivity between different geographical locations, which can span continents or oceans. This connectivity is detected by measuring the similarity in the evolution of physical quantities like air temperatures at these locations. For instance, in the case of El Nino, strong connectivity in the tropical Pacific tends to build up in the calendar year before the onset of the event. That’s a fundamentally different approach from traditional numerical modelling used in weather and climate forecasts. It does not simulate the entire Earth system, but analyses large-scale connectivity patterns in observational data.

These patterns, that are the connectivity between the locations and their evolution in time, can provide critical new information for forecasting – and, so we hope, make the respective regions safer. With this Perspective, we have brought together several success stories that demonstrate the scientific power of the network approach for forecasting – and, in consequence, for potentially saving thousands of lives and avoiding billions of economic costs, states co-author Maria Martin, also at PIK. Hans-Joachim Schellnhuber, former Director of the institute, concluded.

Phase Down From Coal As Main Source Of Energy, Invest More In Renewables: ICMR And Lancet Report