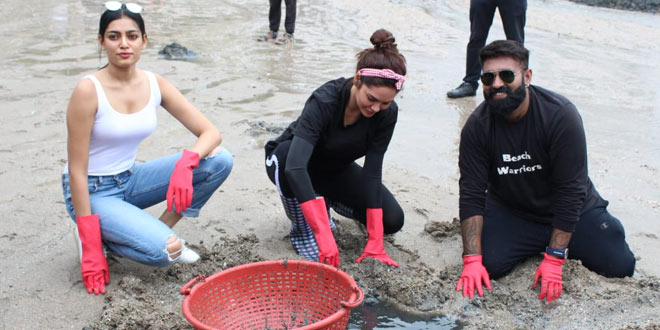 New Delhi: On Sunday, the city of beaches – Mumbai woke up to see its biggest clean-up drive, covering around 100 locations to mark the successful completion of 100 weeks of the clean-up initiative taken up by the beach warrior Chinu Kwatra. In 2017, the 27-year-old kick-started his beach clean-up crusade from Dadar after getting inspired from a lawyer turned activist Afroz Shah, who spearheaded the now world-famous Versova clean-up. And today he has extended it to seven beaches in the city – Dadar, Cuffe Parade, Bandra, Worli, Erangal, Madh, and Juhu. In the past 99 weeks of regular clean-up, the beach warrior had helped in removing more than 2000 tonnes of waste from all the beaches of Mumbai he has been covering. On Sunday, Chinu hit the milestone by removing around 86,000 kilograms of garbage together with more than 6400 Mumbaikars.

I feel like a Kohli and a Dhoni today, given that we have scored a century. But we need to score more centuries to actually ensure that the beach is clean and plastic free, said Chinu Kawatra while speaking to NDTV.

Further explaining the motive of the #BigMumbaiCleanup for which the acronym is ‘BMC’, Chinu added,

We wanted to celebrate the work of BMC civic workers for the day. There are around 28,000 civic workers in Mumbai who on a daily basis take care of the waste mess created by the city people. We wanted to dedicate one day to them and help them out by doing their work in keeping Mumbai clean.

A lot of citizens are supporting this initiative. Everyone is realising that we need to make a difference today to have a tomorrow. We have been digging in the sand here since the time we got here because the plastic is all the way inside. If we don’t do this today, there will be plastic on the entire planet tomorrow.

She further added that this is such a great initiative and said, “At the same time, I feel doing this just one day is not enough. It has to go on and this one day is to create awareness about how important it is to keep the planet clean. We have to take responsibility as individuals and citizens and only then the change will happen.”

The waste collected by Mumbaikars on Sunday has been handed over to the civic body for effective management, BMC intends to further segregate it into various categories and then plan out on how to manage this waste in the coming days. Wet waste that includes fruit/vegetable scarps will be used for the purpose of composting whereas dry waste that includes packaging waste, plastic PET bottles to name a few will be used for recycling.

Chinu Kawatra for his efforts also got the pat in his back from various environmentalist and people across the country. Actor and UN Environment Goodwill Ambassador and a UN Secretary-General Advocate for Sustainable Development Goals, Dia Mirza said, “Chinu you are a champion of good. So grateful for your service and humanity. Keep going”

This young dude has completed 100 weeks of dedicated clean up… and not just here, he’s involved in clean ups, taking care of little kids, Pets, and going to flood hit and cyclone hit areas! https://t.co/QOfJjfXVyx

Citizens who got inspired by Chinu’s work urged fellow Mumbaikars for their corporation in keeping the city clean.

Super proud! What a Sunday! Congratulations chinu, We did it!!

Proud achievement of captain @chinukofficial and my @beachwarriors team . god bless u all ????????????

Today participated in the 100th Week of Beach Clean-up Drive organised by Beach Warriors. Thank you Chinu Kwatra for giving chance to do a contribution for our mother nature! @AUThackeray @ShivSena pic.twitter.com/Bqpcset8Bw

Highlighting the future course of action in the coming months, Chinu signs off by saying,

The beach clean-up will continue as it is because there are still many beaches in the city that need desperate attention. But from now the focus will not be just on the weekly clean-ups, I plan to initiate plastic waste segregation drives in each of the slums of Mumbai, wherein people of the slums will be taught the basics of segregation and why it is important so that mindless dumping of waste into the landfills and drains can stop. Secondly, through this initiative, I plan to include ragpickers into the effective waste management chain. Apart from this, I am trying to get started with Delhi’s Yamuna clean-up, currently in the planning stage but hopefully will kick-start the Yamuna clean-up very soon.

To Mark Five Years Of Swachh Bharat Abhiyan On October 2, A Unique Jog And Clean Activity To Cover 50 Cities