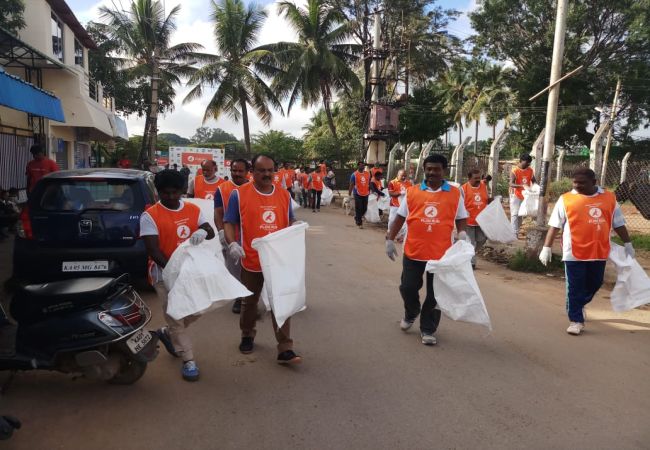 New Delhi: The Swedish phenomenon of “plogging” refers to the act of picking up trash while jogging to clean up the littered streets came into existence in 2016. In no time, it became a fitness fad across the world, countries, according to the UN Environment, the global reach of plogging has led to over 40 countries being represented in the official online “Plogga” group. While most of the initial growth was in Europe, plogging groups can now be found as far away as Ecuador and Thailand. In 2017, the plog run took place in Delhi and made headlines as it was for the first time such an event was being organised in the country. Since then, several plog run communities have sprung up in different parts of the country. Now India is all set to conduct the world’s largest plog run on October 2, 2019 to mark the 150th birth anniversary of Mahatma Gandhi this year. The event is being spearheaded by United Way Bengaluru, an NGO working towards environmental sustainability for more than 20 years. In bid to celebrate five successful years of Swachh Bharat Abhiyan, the NGO is aiming to cover almost 50 cities in India and 1,000 locations, especially the beaches and tourist spots of the country. Talking about the initiative, Manish Michael, Chief Executive Officer from United Way India says,

In recent times, we have seen how plastic waste is affecting the environment and has become one of the challenges. It is depleting our soil, chocking our drains and what not. Last year, the NGO as a pilot project organised Bengaluru Plog run in 60 locations of the city on October 2 with the Bruhat Bengaluru Mahanagar Palike (BBMP). The response we got was phenomenal, more than 10,000 people joined us and we were able to collect 32 tonnes of dry waste in just one day. Later the waste was handed over for proper recycling and the event made it to Guinness Book of World Records as well. And that is what motivated us for a bigger celebration in 2019 and we decided to organise it across India as littering is not restricted to just one city, it is the pan-India problem.

The NGO aims to target 2.5 lakh Indians and further establish communities of ploggers all over the country. Shedding details on how the event will be organised, Mr Michael said,

Our NGO is present across different cities of India, to organise this event, we will be partnering with the Municipal Corporation along with the schools and running communities of the fifty cities we will be targeting for the plog run. This will help us bring together like-minded people who will then help us organise the event across India. We plan to target mostly beaches and the popular tourist destinations as managing waste at these spots become an issue. The plog run that will take place will be for a 3 kilometre distance for each of the location, but will flag off at the same time.

Currently, the NGO is in the process to map the fifty cities and 1000 locations and further set up their own waste collection points from where waste collected will be sent for proper recycling.

The plog run is the best way to give a tribute to Mahatma Gandhi who had always propagated the importance of cleanliness. Last year, through the run, we were also able to inform people about the concepts of recycling and waste management. We hope to organise the plog run with the same zeal this year as well.

35-year-old Jacob Cherian a digital entrepreneur from Bengaluru, who has been promoting ‘The Plogging Party’ event in the country from past one year via his social media says, “Picking up trash simply by walking or running around in your surroundings should be everyone’s mantra. Doing this simple act of cleanliness can do wonders for our country. And one is not just taking care of the environment but is also taking step towards one’s own health. Seeing now communities coming together to host such a big event in the country is really inspiring, plogging can be the way forward for achieving the goal of our dream and clean India.”

Last year, Jacob organised a small plogging trek and planned 3 days and 2-night itinerary for trekkers and invited people to join him for an adventurous clean-up drive in a small hill town of Tamil Nadu – Kodaikanal on his social media. He was joined by 18 volunteers and for 2 consecutive days, everyone cleaned up two trails of the small hill station. From picking up plastic bottles, wrappers, bags to all kinds of modern trash was picked up by the trekkers. By the end of the trek, the team had collected in total 27 large packets of garbage.