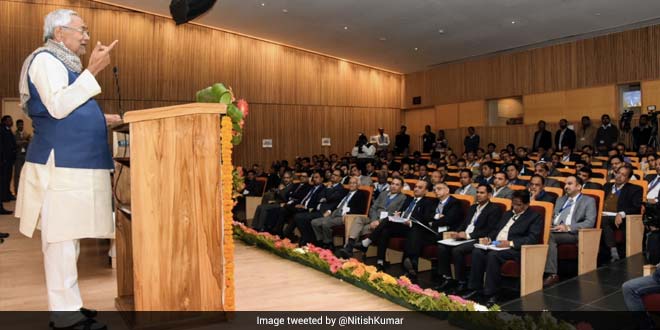 Patna: A two-day conference of central and state pollution control boards was inaugurated here on Thursday (January 16) by Bihar Chief Minister Nitish Kumar. Welcoming the delegates at the auditorium of Bihar Museum, the venue of the conference, the Chief Minister remarked that it was after a long time that the state was getting the opportunity to host the event, the last occasion being in 1992. “I am glad that this conference is being organised in Bihar. The state is making lots of efforts in the direction of pollution control, water conservation, and increasing green cover. The generations to come shall reap the benefits of these”, said the Chief Minister.

Mr Kumar said the state’s green cover has risen as a result of his government’s efforts, though, new challenges have emerged since increases prosperity has resulted in a much greater number of vehicles plying on Bihar’s roads which give rise to the possibility of an increase in fuel emission.

It is to this end that we are trying to promote the use of electric cars. I have been using one myself and many of our senior officials have been provided with the same, he said.

Mr Kumar also expressed concern over climate change, which is believed to be a direct result of environmental degradation, and highlighted “our state used to receive an annual rainfall of 1200-1500 mm earlier, but now gets just over 1000 mm and last year it was as low as 901 mm”.

Besides there has been the peculiar problem of some parts of the state reeling under floods while others face droughts. We need to make efforts to stem the tide. We are already carrying out a Jal-Jeevan-Hariyali campaign which was conceptualised after a meeting of all members of the bicameral legislature here last year, he added.

Mr Kumar spoke at length about pollution control measures taken by his government which include better waste management, restrictions on the use of polythene, and effective sewage treatment system. He said he was sure that many beneficial things will come out of the two-day deliberations during which experts from across the country will hold detailed discussions about more effective ways to curb pollution and preserve the environment.

The function was also attended, among others, by Deputy CM Sushil Kumar Modi who also holds the environment and forestry portfolio besides the secretary for Union Ministry environment, Forestry and Climate Change C K Mishra.

In Climate Push, Microsoft Pledges To Be Carbon Negative, Will Erase Its Carbon Footprint Since 1975

River Ganga Gets A Makeover In Bihar, Courtesy Riverfront Project