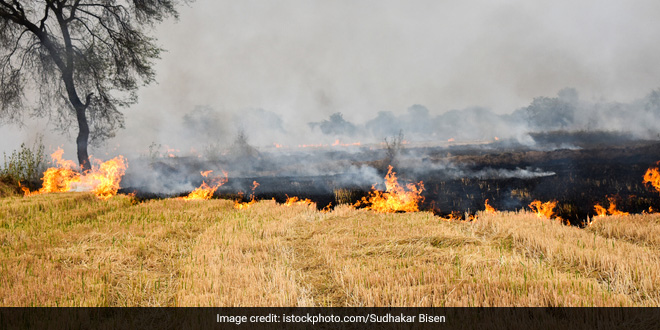 Bettiah: While Punjab, Haryana and Uttar Pradesh governments are struggling to prevent farmers from burning the stubble that chokes Delhi’s lungs, women in Bihar’s West Champaran district have found the means to make good use of the same stubble in a productive manner. The women are not only becoming self-sufficient through the management, but the farmers have found the much needed solution to the problem of stubble burning. In many villages of the West Champaran district, women make items like mats and stools from the stubble.

Such items were made earlier also, but now more women are showing interest and taking up this work.

Chief Minister Nitish Kumar has been trying to spread the message for clean environment and the dangers of the stubble-burning through his “Jal-Jivan-Hariyali” Yatra in the state.

Mr. Kumar, during the course of the Yatra was in Valmikinagar, where he spoke about pollution and the stubble burning issue. The women, of the village took the message and decided to put the stubble to good use.

Zahira Khatoon from the Laxmipur village said that fewer women used to make mats, but more women are taking up the tasks and they work in groups now.

In Champapur, many women are now reaping financial benefits by selling the items made from the stubble. A woman said that she sells the mats and stools to a few shopkeepers in the Bettiah bazaar from where people are buying the things.

In Laxmipur village, most of the women gather at one place after cooking meals and get involved in making items from the stubble. In many homes, this work is going on in full swing. The women say that the weed used to build thatched huts is being replaced with the stubble. Even people are using stubble to make thatched huts now.

He further said that “the mats being made are of every design and size. These mats help keep the bed or the room warm in the winter.”

The agricultural officer of Bagaha-2 block in West Champaran district, Prithvi Chand is all praise for the women. He said,

The stubble burning causes damage to the fields in many ways. Even the fertility of the fields also declines.

He said that the women here have shown a way to manage the stubble, which should be adopted in other villages and states too.