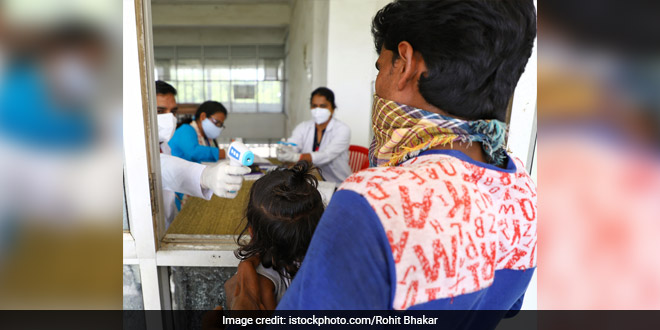 Patna: Bodies lying wrapped in linen alongside petrified COVID-19 stricken patients, discarded PPEs (Personal Protective Equipments) in open dustbins making them a veritable storehouse of the deadly coronavirus, and harried attendants rushing from one counter to the other for a slip that would secure their loved ones, gasping for breath, another chance at life. This is Nalanda Medical College Hospital (NMCH), a designated COVID-19 facility in Patna, emblematic of the frayed health care system, puffing and panting, as it grapples with the pandemic.

The hospital has repeatedly hit the headlines over bodies lying in COVID isolation wards and ICUs alongside the beds occupied by patients who are alive and hoping to beat the disease which had claimed 249 lives and afflicted nearly 40,000 people till Sunday.

Established in 1970, NMCH was declared as the first dedicated COVID 19 facility of the state way back in March, when the disease was in a nascent stage. The announcement by health minister Mangal Pandey had earned the Nitish Kumar government plaudits for its “proactive” approach to the global pandemic. Last week, at least two videos, shot purportedly by horrified surviving patients or their attendants, of the bodies lying for hours on end on adjacent beds evoked outrage on the social media.

Mr. Pandey, who inspected the hospital on Thursday last, claimed the videos are misleading. A protocol ought to be followed for disposal of bodies of COVID 19 patients. This takes a bit of time. Nowadays everybody carries a mobile phone. It is so easy to shoot a video, barely a couple of minutes long, and post it on social media with the claim that a dead body visible in the background has been lying there for hours, or maybe even days, he remarked testily.

However, Vinod Kumar Singh, the newly appointed medical superintendent of the hospital admitted there were “some lapses” in shifting the bodies from isolation wards and ICUs immediately after the death of a patient. NMCH principal Hiralal Mahto, however, said since the mortuary is close to the medical college, which is at some distance from the hospital’s COVID ward, there is an unavoidable time gap between a death and the removal of the body from the ward. Rubbishing the claims made in such videos of bodies remaining inside the wards for hours, Mr. Mahto added cremation of the deceased COVID 19 patients was permitted only at the Baans Ghat crematorium and that too late in the evening.

If a death takes place early in the morning, we cannot help but keep the bodies inside the hospital for sometime, though the sight may be repelling, said Mr. Mahto. A national TV channel, whose reporter visited the Baans Ghat electric crematorium, showed a board hanging outside that read the ‘Machine is not running’ in Hindi. Metres away, pyres were being lit while a conservancy worker was seen collecting body-bags from the banks of the Ganga, with a litter of pigs loitering around.

This is horrible, unforgivable neglect. The man carrying the body-bags with bare hands without wearing a PPE suit can alone infect hundreds of people, said Yashodanand Kumar, a medical representative, who lives close by.

The subpar upkeep at the COVID-19 ward is understood to have also met with disapproval from a three-member central team which toured the state a week ago and visited the NMCH. The hospital superintendent was replaced a couple of days later and opposition parties alleged that he was axed because he spilled the beans on lack of adequate manpower and protective equipment for frontline health workers.

The ruling dispensation, however, repudiated the charge and claimed that the administrative reshuffle followed dissatisfaction with the incumbents handling of affairs at the NMCH. The government insists that the citys health infrastructure is capable of facing challenges of any magnitude with government hospitals like the Patna Medical College Hospital (PMCH), the Indira Gandhi Institute of Medical Sciences (IGIMS) both run by the state besides the AIIMS, Patna. Moreover, over a dozen private hospitals and nursing homes in the city have been permitted to admit, test and treat COVID 19 cases. A leading private medical practitioner whose son, also a doctor, tested positive for the disease said,

All these hospitals are crowded. Everyone, even those with mild symptoms, wants to get hospitalised when there is no need.

The family is in home isolation. He said over 50 city doctors were admitted to AIIMS, Patna, after being infected with the virus, and several other frontline workers have died because of heavy viral load.

The state government should create a facility like the one at Radha Soami Satsang Beas in Delhi. Infected asymptomatic patients or those with mild symptoms should be sent there where a team of doctors should examine and treat them.

If the doctors are of the opinion that the patient needs hospitalisation, only then they should be sent to COVID hospitals. This will check unnecessary overcrowding of hospitals, the doctor, who did not wish to be named, said.

Most patients, he said, got cured on their own with little medical assistance and only a minuscule percentage needed oxygen or ventilator support. There have been complaints that private hospitals are turning away COVID 19 patients and referring them to government hospitals.

The National Thermal Power Corporation (NTPC)recently wrote to the state government complaining about private hospitals associated with the health insurance provider for its employees refusing to treat them, after they tested positive for the disease, and referring them to state-run COVID hospitals against their wish. A retired railway official, who was rushed to the NMCH by his family members after doctors at a railway hospital and the IGIMS allegedly declined to attend to him, died last week within minutes of being put on oxygen. They claimed he died after spending several breathless hours waiting for treatment while his family was busy completing the paperwork. The tragedy had struck, ironically, on the day the health minister inspected the hospital.

Also Read: How Did India Fight An Earlier Pandemic The Swine Flu Outbreak In 2015?

Restrictions In Andamans To Prevent COVID-19 Spread Among Vulnerable Tribes