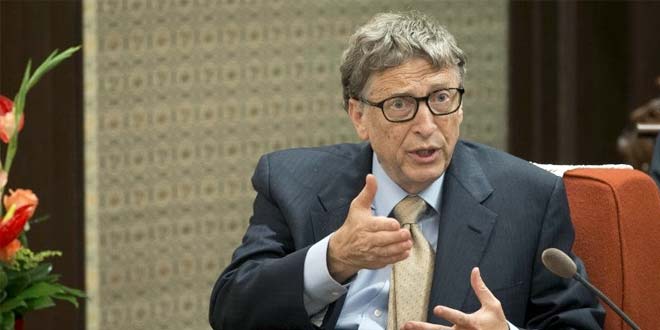 New Delhi: The ambitious objective of Swachh Bharat Abhiyan of making India open defecation free (ODF) by 2019, and its challenges were something that  the  world’s richest man and philanthropist Bill Gates is focussing on during his current visit to India. Speaking about the Clean India Mission, the Microsoft founder commented that building toilets is like opening a savings account, where the real task comes in at effectively utilising it.

Well, building toilets is like opening savings accounts. The real challenge is getting people to use them, he said in an interview to Times Of India.

Mr Gates further highlighted that the usage of toilets is directly linked to its condition, “Part of our Swachh Bharat partnership with the government is to try and make sure that the toilets that are built are not so bad that you’d rather not use them.”

Talking about the role of behavior change in completely eliminating the practice of open defecation he said that once the thought of not defecating in open is ingrained in everyone’s mind it tends to stay and with time the thought gradually turns into an expectation.

Mr Gates, who had earlier lauded the Swachh Bharat Mission’s approach in raising the sanitation standards in a blog, also drew attention to the fecal waste that hampers the toilet usage in one way.

Now, what do you do about fecal waste? It either just builds up, so that the toilet becomes unusable, or you can have a truck come and get it, he said.

In a bid to overcome this problem and ensure that no waste is dumped into the water bodies he said that there is a need to invent a toilet that would get it rid of the waste in the toilet itself.

One of the problems that India currently faces is the common pipe that is used to take out the water and the sewage, “Ganga is Exhibit A of what happens as a result,” he mentioned. He emphasised on the need to build toilets that are cost-friendly but at the same time free from any kind of ordour, is as good as a flush toilet and helps in onsite burning the fecal.

Explaining about the method of segregating the fecal into dry and wet waste he said, “You use a mix of chemicals and mechanical engineering to separate them. So you can have a pump and force the dry part through, and dewater it quite mechanically. Sanitation is highly variable in terms of how wet or dry it is.”

61-year old Mr Gates on Friday met Uttar Pradesh Chief Minister Yogi Adityanath in Lucknow where the two focussed on the need to improve the state’s health infrastructure and the condition of its rivers.

“Gates foundation has a long expertise in sewage treatment solutions & we have been working on various projects in other states, we would also like to work on this issue in UP to treat municipal waste & help clean rivers,” said Mr Gates

Gates foundation has a long expertise in sewage treatment solutions & we have been working on various projects in other states, we would also like to work on this issue in UP to treat municipal waste & help clean rivers: Mr. Bill Gates pic.twitter.com/4Hkm8ZKImW

The Bill and Melinda Gates Foundation has also invested in the development of an odour-blocking perfume that smells like poop as part of an ambitious effort to develop stink-free toilets and improve poor sanitation across India and Africa. It project aims to create a poop smell blocker with the hope to make smelly toilets a thing of past and make a difference in communities with poor sanitation.