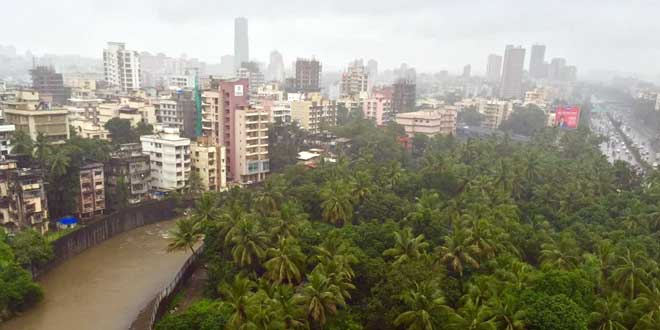 Mumbai: The magic of the monsoon is in its full glory at Mumbai’s Sanjay Gandhi National Park in the suburbs of the metropolis.

Most people in the financial capital may not be aware that four of Mumbai’s rivers originate from the national park. One of them, at the northern edge of the city, is the 12 km long Dahisar river.

Inside the park, the river is sparkling clean making it a tourist spot. Often one can find tourists relaxing or sun-bathing on the river banks and even having water from it. Yes. It’s hard to fathom but that is the truth, though, only partially.

As the Dahisar river traverses through the park after 6 kms the rain-fed river meets the city. And the pristine river, gradually turns into a huge gutter.

“This is not a river anymore. It has become a nallah. There is a dhobi ghat which releases chemical laden water. Then, there is a tabela which dumps cow dung in it and then untreated sewage is released by the civic body” says Shubha Raut, the former Mayor of Mumbai.

Right outside the park is a filthy dhobi ghat where even hospital and hotel linen is washed. The washing takes place inside the river into which waters filled with bleaching powder and soap are freely released.

“We don’t want to wash in the river. But we don’t have water or a proper area. So we have to use the river” says Kalu Ram who heads the washer-men’s union.

Just 500 meters ahead, untreated sewage water from residential complexes is dumped in the river. As the sewage meets the river the stench spreads all across the area. On a closer look at the banks, one only finds it littered with human excreta and rubbish which have been thrown without a care.

Fed up citizens have formed a group called the River March and have been pushing the Maharashtra government and the Brihanmumbai Municipal Corporation (BMC) to act on it for the past 3 years.

“We tested the river water outside the park and we found that pollution levels are extremely high” says Gopal Jhaveri, Founding member of River March. “Oxygen levels have dropped drastically which will affect all types of life forms inside the river. Resolving this is not rocket science. This waste has to be treated and the technology is there in the open market even in India,” he explains.

Like a hint of hope, local Shiv Sena Corporator Sheetal Mhatre who has been working on the issue says she has, too, urged the civic body to fund not just the river’s clean up but also its rejuvenation.

But will this be enough to save the river? And how long will it take to undo the damage? Critical questions that hinge on how soon the good intent can be put into action.

Swachh Campaigns That Caught Our Attention

Felt I’d Die When I First Got My Period: Every Second Indian Girl’s Story