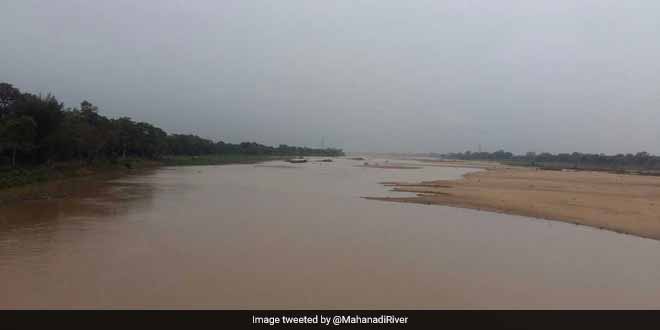 India’s rivers today are plagued with problems of pollution, extensive usage of their water resources and gradual decay in water quality due to disposal of every possible type of waste. Apart from these, sharing of water resources between states has often led to bitter legal disputes, which in turn have hurt the rivers and people dependent on them. River pollution is a serious environmental threat in India today. Mahanadi, one of India’s major rivers in the East-Central belt flows through the states of Odisha and Chhattisgarh. Flowing for a total of 851 kilometres, the river flows in Odisha for 494 kilometres and 357 kilometres in Chhattisgarh, but the state of the river remains worrying in both.

Discharge of municipal sewage, industrial sewage and biomedical waste has reduced the river to a polluted mess in several parts of Odisha. What was once a flowing river with clear water has witnessed deterioration in its water quality in the last four decades, primarily due to severe pollution. Usage of water from Mahanadi was already extensive in the state due to agriculture and industry. Over the last few decades, population growth in towns, cities and urban clusters has resulted in additional problems of household waste disposal, small factories disposing chemical waste into the river’s tributaries and excessive usage of water has now resulted in extensive damage to the river.

Sambalpur, one of Odisha’s oldest and primary cities is also one of the worst violators affecting Mahanadi. A slum dominated city, Sambalpur hosts around 101 slums where 60 per cent of the city’s 4.35 lakh population resides. The western part of the city is from where the entire town’s sewage is discharged directly into the river. 12 outfalls release the sewage directly into the river. The sewage consists of faecal sludge, greywater from toilets, kitchen waste and several other contaminated forms of liquid waste. In the months of summer, when water from the Hirakud dam is barely released, the river gets dry and it is only the sewage water that is available, and continues to be used. More than 130 kilolitres of untreated sewage is dumped daily into the Mahanadi from Sambalpur alone. In Chhattisgarh, the areas of Jharsuguda, Brajarajnagar and Bargarh carry urban waste directly into the river, amounting to nearly 80 to 100 kilolitres daily.

For Mahanadi, it is a double edged sword with both Odisha and Chhattisgarh continuing to dump sewage in the river. The sewage from Odisha especially comes from one of the major towns and given the high population density, contains massive amount of pollutants. These get deposited in the river’s banks. People however, continue to use polluted water, especially in summer when the water levels are lower and the level of contamination in available water is much higher, said Dr Harshvardhan Jana, Professor of Environmental Science at Sambalpur University.

Environmentalists and river conservation scientists are still trying to figure out how to put a pause on effect of industrial pollution on India’s rivers. Mahanadi remains one of the most industrially exploited and polluted rivers in India. A 2012 report by the Central Pollution Control Board (CPCB) identified that 65 per cent of Odisha’s industrial units are polluting in nature and are engaged primarily in manufacturing of textile goods. The Mahanadi basin is home to 15 large industries, along with aluminium and thermal plants. More than 5,000 kilolitres of industrial sewage is dumped daily in the Mahanadi  by Odisha’s large industries alone. Small ones account for an accumulated number of roughly 2,000 kilolitres daily, as stated in 2014 report by the Centre for Science and Environment. The scenario is similar in Chhattisgarh, where small and big industries together dispose nearly 3,000 kilolitres of industrial sewage daily.

Industrial sewage is the worst form of pollutant for any river. The chemical compounds in industrial waste and sewage are poisonous and toxic and the discharge of these effluents has long term effects on a river’s ecological balance and harms river fauna extensively. Worse, people continue to use this water for daily purposes and the contamination gradually enters the land as well, spreading through used river water, faeces etc., said B.N Bhil, Senior Environmental Scientist, State Pollution Control Board, Odisha.

Neither Odisha nor Chhattisgarh have done much to curb industrial pollution in Mahanadi. Despite Odisha government and the state pollution control board being categorically told by the Comptroller and Auditor General (CAG) in 2001 to spend at least 5 crores per year roughly to curb industrial pollution in the Mahanadi, but till 2016, no report has been submitted by the state government on the nature of steps and expenditure incurred to combat pollution in Mahanadi. In Chhattisgarh, the work for completing two effluent treatment plants is underway but the state pollution control board is sure that they will not be enough. At least 10 effluent treatment plants would be needed to treat the industrial sewage from Chhattisgarh’s major polluting points. The state government has sanctioned only two. 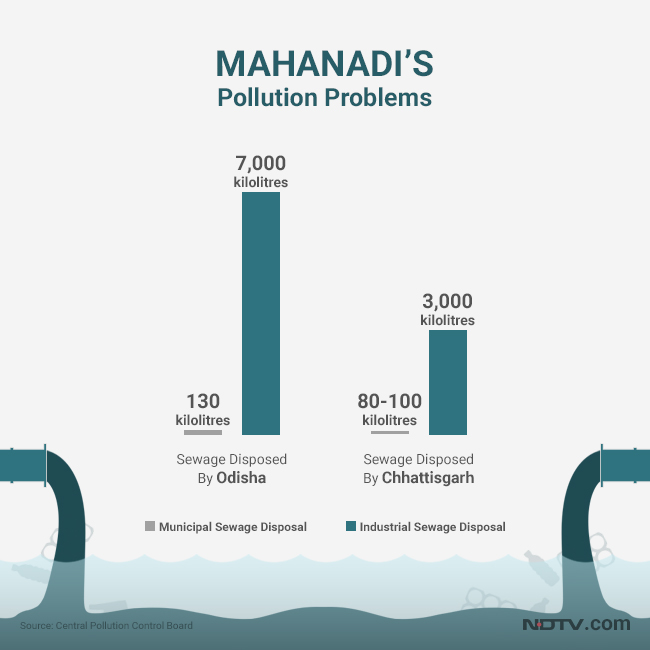 Disputes Between States Not Helping

The bitter dispute between Odisha and Chhattisgarh has not helped Mahanadi. Instead of coming together and tackling the pollution issue together, both the states have been entangled in a legal battle over and water sharing. Chhattisgarh’s plan to construct 13 barrages to extract more water from the Mahanadi has alarmed the Odisha state government, which may see Chhattisgarh use up to 88 per cent of the river’s water. The Odisha Chief Minister Naveen Patnaik had also written to Prime Minister Narendra Modi in 2016 regarding the matter and public interest litigation (PIL) had also been filed in the Orissa High Court regarding the same. River conservationists have called for both the states to come together to tackle the bigger problem of pollution, failing to do which may result in the river itself not being there to fight for.

There should definitely be talks between the two states on matters like barrage construction and water sharing but the topic of pollution must be put on table. The amount of domestic and industrial waste discharged by the two states is a lot and unless tackled together, pollution will very soon ensure that there is no Mahanadi left to fight for, said Arnav Naresh Panda from Mahanadi Bachao Manch, Odisha.

Mahanadi is an example of years of neglect by not one but two state governments. Not just apathy towards the river’s pollution, the states engaging in dispute has also lessened the chances of them coming together to tackle the pollution menace. What Mahanadi urgently requires is to ensure that both the states have adequate amount of effluent treatment plants to tackle industrial waste and ensure it is treated before being discharged into the river. Odisha’s problem of domestic sewage going into the river also needs to be dealt with urgently, because domestic sewage disposal has resulted in the river becoming unusable in nearly 32 locations in Odisha alone. While water sharing is an importance topic, the gradual decay of Mahanadi will soon pose severe water problems for both Odisha and Chhattisgarh and the sooner the states decide to take up the matter with seriousness, the better it will be for them.

Also Read: From Discharge Of Industrial Effluents To Disposal Of Household Waste, Godavari Faces Continuous Dangers Across The Major Three States It Flows Through