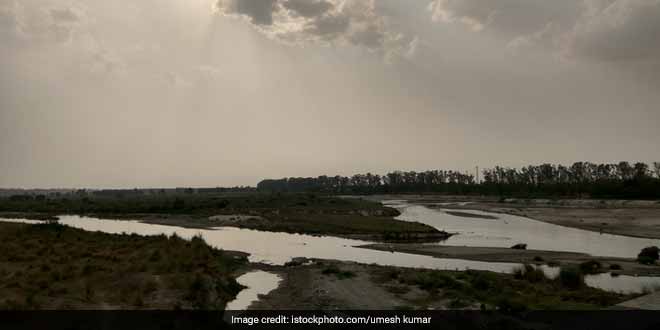 One of India’s most prosperous and agriculturally productive states, Punjab, since the days of partition has been plagued with several problems, environmental and politically. Though the state has continued with its good economic growth, a different problem today poses significant threat to Punjab, a problem which has far reaching consequences for the state and its population. Rivers, Punjab’s lifeline are in a direly polluted state today, affecting its population and threatening the state’s economic backbone of agriculture.

Known as the land of five rivers, Sutlej, Beas, Ravi, Chenab and Jhelum flowed through Punjab, all of which are tributaries of river Indus. Part of Punjab went to Pakistan post partition and presently, Sutlej, Beas and the monsoon only river of Ghaggar flow through the state of Punjab in India, while the river Ravi flows partially through the state. Sutlej, which is the state’s most important river as many of Punjab’s important cities like Ludhiana and Ferozpur have established themselves on the banks of the river. But the problem of pollution is not concentrated to Sutlej alone. All the four rivers in the state today stare at a pollution crisis, fuelled by long unchecked disposal of industrial waste.

The Degrading Water Quality of Sutlej

In April 2016, the Punjab Pollution Control Board (PCPB) came out with a report, post testing water quality from 37 locations where the Sutlej river flows in the state. The river, which enters in Ropar district in Punjab begins to deteriorate as the river runs its course in the state. As per the state pollution control board’s categorisation the entrance of Sutlej in Ropar is of ‘B’ category, which makes it fit for bathing and washing purposes. Subsequently, in Ludhiana, one of the state’s biggest industrial belt, the river water quality is a major deterioration to ‘D.’ The plight of Sutlej does not end here as the water turns to a further worse grade of ‘E’ near Doaba region, along the Chitti Bein drains.

Ludhiana remains the worst polluter of Sutlej as both domestic and industrial waste continues to be dumped in the river. 12 outlets from the city release untreated sewage from industries and households into the Budhha Nullah, which in turn dumps the sewage in Sutlej. In July 2016, on the basis of the state pollution control board’s report, the Central Pollution Control Board (CPCB) sought a reply from the Ludhiana Municipal Corporation (LMC). The 12 outlets combined to release over 2,000 kilolitres of sewage daily and the sewage contained toxic pollutants such as chemical residues, medical waste as well as faecal sludge, which went into the river untreated. 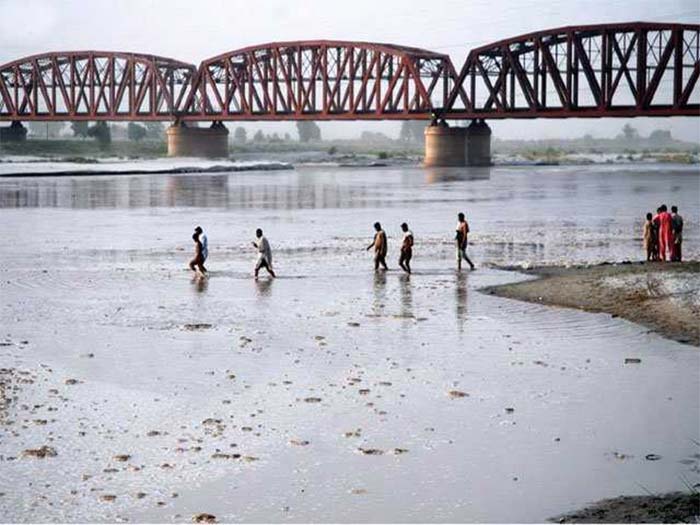 Despite the flow of industrial pollutants, people are dependent on river Sutlej

The Ludhiana civic body’s attitude towards controlling the disposal of sewage has been absolutely lacklustre. The unhygienic open outlets are themselves polluting the environment and disposal of untreated sewage into the river is resulting in the quality of water deteriorating. Ludhiana’s role in polluting the Sutlej is visible from the fact how the water quality becomes better when the river exits the city, said Dr Babu Ram, Member Secretary, Punjab Pollution Control Board.

The Ludhiana Municipal Corporation however, maintained that it was not easy to merely stop disposal of sewage and it was working on setting up at least three sewage treatment plants in the city. An LMC official said that the number of outlets have been brought down to 12 from 17 to curb sewage disposal in the river, which was a significant success for the civic body.

Beas: An Already Polluted River Is Further Polluted in Punjab

Beas river begins flowing from Kullu in Himachal Pradesh and enters Punjab via Kapurthala district. Once known for its clean and serene waters, Beas for the past several years has been at the receiving end of waste disposal from both Himachal Pradesh and Punjab. Kullu from where the river originates, has only 40 per cent of its houses with a sewerage connection to an STP, and the rest goes directly into the river. Much is not different for Beas in Punjab. The Doaba region, where the river flows for nearly 160 kilometres is one of the filthiest stretches. Kali Bein, a tributary of the Beas is known for its industrial filth, often visible on the banks. The stretch is known for its high level of hyacinth growth and in summers, when parts of the river dry up, instances of waste coming up on surface have also been reported.

Waste from hotels and households give industrial waste a tough competition in polluting the Beas and in 2016, a record 35 hotels were slapped with notices by the Kullu Municipal Corporation (KMC). In Punjab, voluntary organisations have attempted to clean up the 160 kilometre stretch in Doaba, though the cleanup efforts have yielded mixed success as industrial effluents such as zinc, magnesium, chromium and nickel from factories in nearby towns are continued to be disposed in the river.

Beas is in a worse state than Sutlej because it already enters in a polluted condition from Himachal and encounters further pollution in Punjab. Nearly all nearby industries have been using the river as a dumpsite for years and now, the river’s banks have become polluted as well. The long stretch of the river is a problem but at least at Amritsar, we are placing strict regulations to ensur that there is no waste disposal in the Beas. Violators will be fined by the municipal corporation, said Saurabh Arora, Joint Commissioner, Amritsar Municipal Corporation.

State Apathy a Matter of Concern

River pollution in Punjab is unfortunately not taken up with as much seriousness as it should be. Though not major rivers of the state, Ravi and Ghaggar have also been battling with severe pollution. In 2014, more than 20 villages in Mansar district of Punjab, through which the Ghaggar flows reported that the river’s water had turned to pitch black, leaving it useless for either drinking or irrigation purposes. Similar to Sutlej and Beas, industrial effluents from nearby factories have rendered many parts of the river polluted beyond repair. 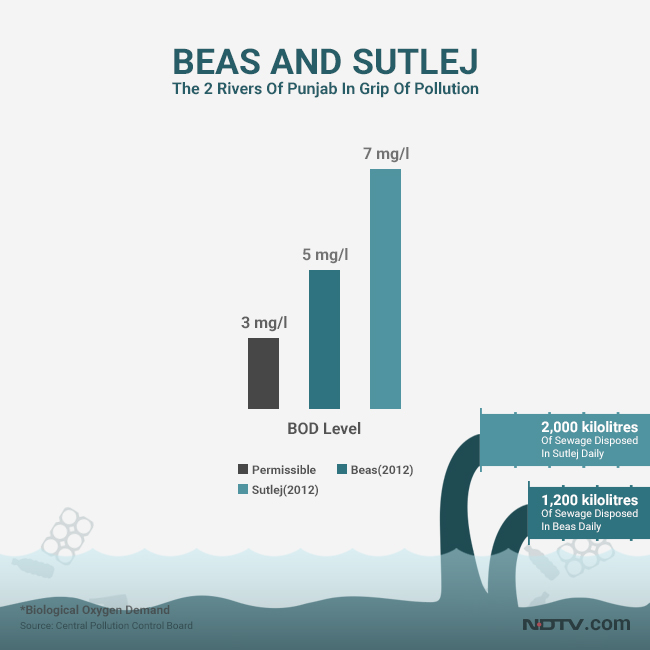 Despite the CPCB, in 2013, identifying eleven grossly polluting industries responsible for dumping waste directly into the state’s rivers and lakes, no steps were taken to curb their waste disposal methods. In 2011, the government of Punjab received a Rs 1,000 crore grant from the Central government to clean up its rivers. But the polluting industrial units continue to function with flourish and little has been done to address the problems of the state’s polluted rivers.

The state government, the state pollution control board and the municipal councils have all failed to address the problem of river pollution in Punjab. The grossly polluting industries continue to dump waste in the rivers. The same water is being used for drinking, irrigation as well as polluting the groundwater sources of the state. The backbone of Punjab’s prosperity is threatened because of river pollution, said Dr SS Johal, Former Vice-Chancellor, Punjab Agriculture University.

The Punjab state government however, maintains that much has been done to keep river pollution in check. Out of 101 medium scale industries, 53 are said to be complying with waste disposal norms while 17 have been shut for violation. The rest 31 units have been duly warned by the state government to ensure that no waste is dumped in the river.

Shutting down industrial units is a difficult option as many livelihoods are dependent on it. We always give violators a chance to relocate or install sewage treatment options. These are complicated processes and takes time to execute, but we are equally concerned about the state of rivers in Punjab, said an official from the Department of Water Supply and Sanitation, Punjab.

Given the unsuccessful use of the Rs 1,000 crore grant in revamping Punjab’s rivers, the state has much to do in terms of cleaning up its rivers. Like all of India’s major rivers, industrial waste plays a major role in Punjab’s river pollution and must be halted. Punjab has 38 operational sewage treatment plants and 13 more are proposed to be coming up in the next two years. Urban local bodies should also focus on ensuring that waste from households is not disposed into nearby rivers, as that has been the norm till now. If the flow of pollutants in rivers is stopped, the next task would be to clean up the rivers to ensure that water from the rivers become usable for domestic and agricultural purposes.

Caught In The Crossfire Between Odisha and Chhattisgarh, Mahanadi’s Pollution Problem Continues To Grow Due To Unchecked Waste Disposal