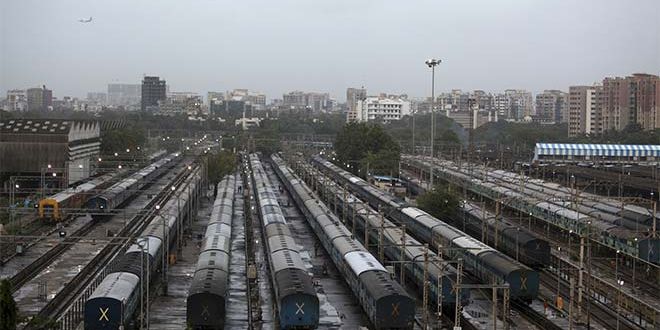 New Delhi: Taking Swachh Bharat-Swachh Rail initiative forward, the Indian Railways has decided to now display the logo of the government’s flagship project Swachh Bharat Abhiyan and the national flag on all the coaches. This is being done as a part of the celebrations to commemorate the 150th birth anniversary of Mahatma Gandhi On October 2, and celebrate Rashtriya Swachhta Diwas. The Railway Board has also announced that Railway Ministry’s ‘Swachchta Pakhwara’, which is a fortnight cleanliness programme, will commence from September 15 to October 2, as run up to Rashtriya Swachhta Diwas.

Along with this, the Railway Ministry has also selected some 43 stations such as Delhi, Lucknow, Mumbai, Surat, Danapur, Asansol, Bengaluru, Vadodara, Puri, Amritsar, Haridwar and Kurukshetra to name a few that will be painted thematically for October 2 celebrations. Speaking to NDTV about the initiative a senior officer from the Railway Ministry said,

We have selected some of those stations that have a special association with Mahatma Gandhi. The Ministry Board has decided on the themes like sanitation, non-violence, voluntary community service, communal unity, removal of untouchability, and women empowerment for painting these stations. Apart from this, the ministry has also selected 28 others near iconic places that would undergo massive cleanliness drives. For cleanliness, this year special focus will be given to the golden triangle region – from Delhi, Agra and Jaipur.

The senior officer also said that for now the instructions have been circulated to all the zonal officers of the railways and October 2 this year has been set as a deadline for completion of these activities. The officers have also been asked to plant trees along railway tracks and participate in ‘Shram Daan’.

This year itself, Indian Railways has introduced many steps to up its swachh game. Recently, the western railways introduced WhatsApp numbers, wherein passengers can just click a picture of dirty/unclean toilets and send it on a designated complaint number for immediate action to be taken. Earlier, the Northern Railways deployed WhatsApp groups to monitor the cleanliness of trains across departments – from pantry departments to bedrolls, toilet cleaning and coach cleanliness. The staff is required to upload the status report of the work done by them in the form of photos during their shift in their particular WhatsApp group on a daily basis.

Plastic Ban In Tamil Nadu: Carry Your Own Utensils And Get 5% Discount On Takeaways