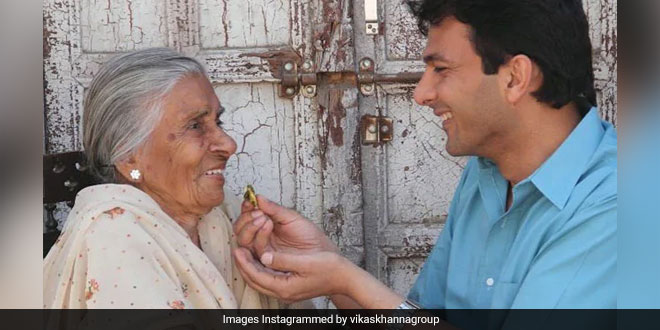 New Delhi: During the last nine months of COVID-19 pandemic, the world got to witness tragedy and hardships in equal measure as acts of kindness in various forms. Due to the strict lockdown imposed to control the pandemic, lakhs of migrant workers and daily wagers lost livelihoods and were forced to survive on the mercy of others or move back to their villages. In response to this, many individuals and organisation came forward to help the people who were worst hit by the pandemic. Michelin-star chef Vikas Khanna took to serving food during this period.

Also Read: Poshan Maah 2020: How Indira Didi, An Anganwadi Worker Is Braving All Odds Amid Coronavirus To Keep Her Village Healthy

Mr. Khanna launched Feed India Campaign in March which has spread across over 100 cities in the country. Under the initiative, he has partnered with the National Disaster Relief Force (NDRF) and set up make-shift kitchens alongside highways and by roadsides. He has also partnered with various companies, philanthropic organisations and individuals to provide for millions of families across the country. The initiative has served over 40 million meals to the poor and needy and will be achieving the 50 million mark in the next few days.

There are a lot of challenges to support relief in flooded areas of Bihar & Assam (especially the remote ones)
But I pledge 2 million+ meals in the affected areas.
We will do best to our ability. #Faith #FeedIndia

While talking about his initiative and elaborating on the work done so far, Mr Khanna who has been implementing the initiatives from the USA said,

Feed India Campaign is a drive to distribute dry ration and cooked food to the needy. This has been challenging because of the different requirements in different places. When we were feeding people in gas stations, it had to be cooked meals. Highways had to be cooked meals. Community centres, quarantine centres where cooking facilities are not available, we are providing cooked meals and places like old age homes, ashrams, leprosy centres, orphanages, where there are cooking facilities, we started doing dry rations which became easier for us.

While conducting various food distribution drives under the Feed India Campaign, Mr. Khanna, who turned hero for many, started slippers distribution drive after coming across a heart-wrenching photo of a barefoot child collecting food at one of his food stations. Over five lakh slippers have been distributed under this initiative.

Also Read: Call Of Duty: Doctor Reaches Home, 30-Minute Away From Hospital, After Over 5 Months

He has also donated a number of personal protective equipment (PPE) kits to various hospitals including Deenanath Mangeshkar Hospital in Pune that was built in the memory of the legendary singer Lata Mangeshkar’s father. Ms. Mangeshkar took to Twitter and said she was humbled by Mr. Khanna’s gestures. She wrote,

During the pandemic, Mr. Khanna has also distributed millions of sanitary napkins across the country. On the occasion of Raksha Bandhan in August, he announced that his teams had crossed distribution of three million sanitary napkins under this initiative.

Today on the auspicious day of #RakshaBandhan I am proud to say that we crossed distribution of almost 3 Million Sanitary Pads around India. @NiineIndia
Thank you @PayalTulsiyan for being my spiritual sister on this mission. pic.twitter.com/7Didk88fBM

Even before the COVID-19 pandemic hit the world, Mr. Khanna had remained active in his philanthropic work. He has been associated with various old age homes, leprosy centres, orphanages among others. He had also participated in various relief works during natural disasters like floods and hurricanes in India, Africa and USA.

Also Read: COVID Warriors: From Providing Medical Equipment To Hospitals To Feeding The Hungry, This NGO Is Doing It All

COVID Fighters: On Duty for 160 Days, Mumbai’s Dr Mehul Shah Shares How His Team Is Fighting The Pandemic From The Frontline