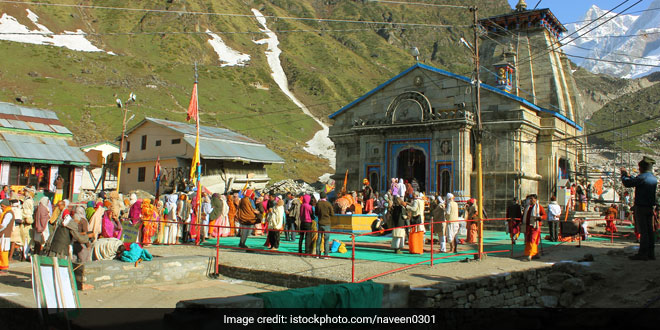 The way plastic garbage has piled up in a sensitive place like Kedarnath is hazardous for our ecology, says Professor MS Negi, Head of the Department of Geography, Garhwal Central University

Dehradun: With a large number of pilgrims taking part in the ongoing Char Dham Yatra, experts have warned of a serious environmental threat amid threat to the state’s exotic herbs which are facing extinction. Further, with an increase in tourism activities in the state, heaps of plastic waste and garbage have been seen piled up on the stretch leading to Kedarnath, a prominent place of worship in the yatra. The director of the Higher Plant Himalayan Research Institute (HAPREC), Professor MC Nautiyal, who has researched the climate change and herbs of the high Himalayan regions, said,

Over the past several days, Kedarnath is witnessing an increasing human activity. At the same time, the garbage heap in the Kedarnath area is destroying the valuable herbs here. Among the prominent herbs, several of them have gone extinct here, including Jatamasi, Atish, Barmala, Kakoli and other herbs. All this is because of severe climate change coupled up with increasing human activities in the region.

“The tourist inflow has risen manifold due to which plastic garbage has increased as we don’t have proper sanitation facilities. This has affected the natural vegetation. Medicinal plants are getting extinct as well,” he said.

We are witnessing record-breaking devotees in the state these days due to Uttarakhand Char Dham Yatra. Most of the devotees are reaching Kedarnath. Businessmen and the government are getting good income due to a large number of pilgrims reaching Kedarnath Dham. But at the same time, the ever-increasing human activity in Kedarnath has become a major threat to the environment.

“The way plastic garbage has piled up in a sensitive place like Kedarnath is hazardous for our ecology. It’ll lead to erosion which can cause landslides. We must keep in mind the tragedy of 2013 and remain careful,” Professor Negi said.

Scientists have expressed concerns over the accumulation of plastic and other waste. The head of the Department of Geography of Garhwal Central University, MS Negi, who does research in the Himalayan regions, told ANI that the garbage in Kedarnath is a big threat.

At the same time, people associated with the tourism department also say that Kedarnath Yatra is very important from an economic point of view.

Uttarakhand, also known as Devbhoomi or the Land of Gods, is home to numerous temples and welcomes devotees all year round. Among the countless religious sites and circuits that devotees visit in Uttarakhand, one of the most prominent is the Char Dham Yatra. This Yatra or pilgrimage is a tour of four holy sites – Yamunotri, Gangotri, Kedarnath and Badrinath – nestled high up in the Himalayas. In Hindi, ‘char’ means four and ‘dham’ refers to religious destinations.

The opening of Gangotri and Yamunotri marks the commencement of the Uttarakhand Char Dham yatra.

Monkeypox Not As Contagious As COVID-19, Says COVID Panel Chief